The Battle of Britain – 75th anniversary

During the Second World War what became known as the Battle of Britain took place from July to October 1940. This phase of the war was the German air force’s attempt to gain air superiority over the Royal Air Force in Britain.  It was the first major battle to take place entirely in the air. The Germans failure to win the battle was one of the major turning points of the War and ultimately prevented Germany from invading Britain.

On 10th July a fly-past over Buckingham Palace and other events, held with the six surviving members of the airforce, took place to commemorate 75 years since the start of the battle.

On 18 June 1940, Prime Minister Winston Churchill told the British people,”… the Battle of France is over. The Battle of Britain is about to begin.” It was just four days later that France surrendered to Germany and Adolf Hitler started to look to an invasion of Britain.

Due to Britain being an island they could not just roll the tanks across a land-locked border, they needed to gain control of the skies to avoid bombings from above. It was Hermann Goering, the head of the Luftwaffe, who was instructed to make sure the RAF was “beaten down to such an extent that it can no longer muster any power of attack worth mentioning against the German crossing”.

The Royal Air Force had the high-performance Hawker Hurricane and Supermarine Spitfire fighters as well as the added enhancement of radar.

The battle began in mid-July and the Luftwaffe attacked shipping in the English Channel and coastal towns and defences. From mid-August, Goering started to attack the Air Force itself bombing airfields and radar bases. The fighter pilots and planes remained resilient so they set about destroying London and other cities. ‘Battle of Britain Day’, marks the successful actions of the RAF to stop the onslaught by the Luftwaffe above London and the south coast.

Hitler turns his attention to the Soviet Union

On 17 September, Hitler postponed his plans to invade Britain against this resilience from both pilots and people. Although the German Air Force continued to bomb Britain until war was over the focus of his invasion plans shifted to the Soviet Union.

Prime Minister Winston Churchill praised the actions of the fighters during the Battle of Britain in a famous wartime speech. You can read it here

In figures provided by the RAF:

*Images courtesy of IWN Duxford and the BBC 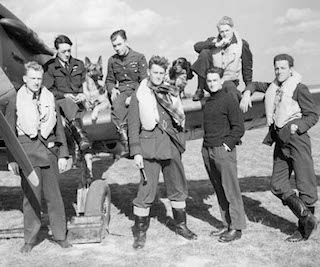