The Battle for London: Goldsmith Vs Khan

On the 5th of May candidates will be battling it out to become the next mayor of the big smoke. In all likelihood we will either see Labour’s Sadiq Khan or the Conservative’s Zac Goldsmith taking the baton from the visionary who took away bendy buses but gave us Boris bikes, BoJo himself. I think it’s time we delved a little deeper in to who Sadiq and Zac are and what they have to offer our capital. So let’s see how they stack up below!

In the red corner we have Sadiq, a born and bred Londoner who’s been married for over twenty years and has two children. Khan is a practising Muslim and grew up on a council estate, his father was a bus driver and his mother was a seamstress. Sadiq is a big sports fan and has run the London marathon. For all you astrology fans it may help to know that Sadiq is a Libra, which should mean he is intelligent, charming and solution oriented!

Before becoming a MP in 2005 for the constituency of Tooting Sadiq was a human rights lawyer. Khan has served as both Minister of State for Communities and Minister of State for Transport. He was the mastermind behind Ed Miliband’s leadership campaign and one of the MPs to nominate Jeremy Corbyn for the leader of the Labour Party. Sadiq is often described as a social democrat.

Sadiq has promised that he would be a pro-business Mayor and has stated he will focus on safety in the metropolis via neighbourhood policing. He wants to keep council tax as low as possible and for London to be at the centre of low carbon innovation. Khan has termed himself ‘a proud feminist’ saying he will fight for gender equality.

‘My vision for London is a simple one – I want all Londoners to have the same opportunities that our city gave me: a home they can afford, a high-skilled job with decent pay, an affordable and modern transport system and a safe, clean and healthy environment.’

Sadiq received the ‘Newcomer of the Year Award’ from The Spectator in 2005 for his comments on Islamic terrorism.

Khan played a pirate in a school production of Peter Pan and wishes he had taken up playing the guitar or bass.

Fighting for the blues is Zac who also hails from the capital, Zac has four children, three with his first wife and one with his second, Alice Rothschild. Goldsmith is part of a wealthy dynasty, the son of a billionaire financier, he’s worth hundreds of millions. He didn’t attend university, instead going trekking in the Himalayas. Zac has no formal religious beliefs and is a Capricorn, which apparently means he’s responsible, patient and ambitious.

Before becoming an MP in 2010 for Richmond Park, Zac was editor of The Ecologist magazine for almost a decade. Zac is thought of as an independently minded parliamentarian and is a committed environmentalist. He’s opposed to both Heathrow Expansion and the UK remaining in the European Union.

If elected as Mayor, Zac has promised to focus on housing issues in the city by increasing development and giving locals first dibs on new homes. He also wants to see the creation of more green spaces and a tougher stance on air pollution. Goldsmith has spoken out on gang culture, saying he will implement tough new rulings for gang leaders.

“ I don’t apologise for where I came from because I know I’m doing what I’m doing for the right reasons. I was dealt a good hand in life. There’s no question about that. But my job is always to play it well and I’ve campaigned every day of my life for things I’ve felt are important.”

Breaking the conventional wisdom that politics is show business for ugly people, topping the list of sexiest male politicians.

Zac’s Eton education went up in smoke when he was expelled from the politician factory as Cannabis was found in his room. He insists it wasn’t his but admits he was ‘never particularly innocent at school.’

So the choice is yours Londoners, will it be Zac or Sadiq on the 5th of May?

I live in the quaint and sometimes bonkers town of Totnes, Devon.

I like foraging and crafting, reading philosophical journals and sometimes throwing things at the TV during the news….’ 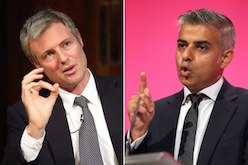 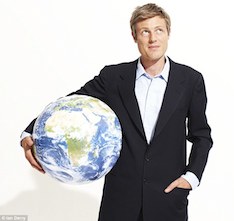 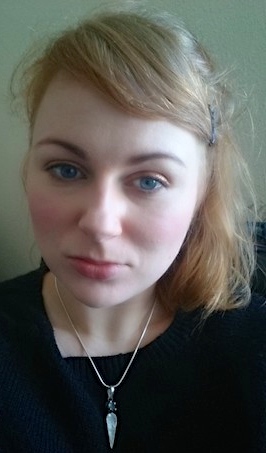