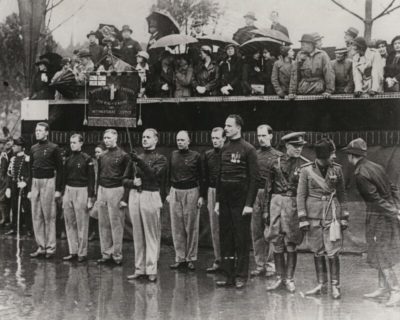 When we think of fascism, Germany and Italy tend to spring to mind. Britain is often considered a very democratic country and is therefore not really associated with extreme political ideologies such as fascism. During the 1930s, many European countries saw a growth in right-wing politics and Britain certainly fitted this trend.

During the early 1930s, fascism was admired by some members of the British public. Europe found themselves in a financial crisis and fascism seemed to be working to solve problems such as unemployment in Italy and Germany.

One particular admirer of fascism was Sir Oswald Mosley who went on to create Britain’s very own fascist party known as the British Union of Fascists.

Initially, Mosley seemed like a man with a plan to get Britain out of financial turmoil but this soon evolved into a movement that mirrored violent European fascism, which quickly switched the public’s view of the ideology.

Sir Oswald Mosley was born into an aristocratic family and began his young adult life in the army during World War One. As with many soldiers, the war considerably shaped his outlook of the world, motivating him to ensure that such a catastrophic event would never happen again.

From 1918 to the early 1930s, Mosley was an MP on numerous occasions but his political allegiances flitted between the Conservatives, and Labour, declaring himself to simply be “a representative of the war generation”.

The 1929 stock market crash and the subsequent surge in unemployment urged Mosley to strive to find a solution to this vast economic problem.

In January 1930, Mosley published The Mosley Memorandum which set out his solution to unemployment. The memorandum blamed the economic crisis on the collapse of foreign economies and British dependence on exports. At this time British economic policy was dominated by a more Laissez-Faire approach. As a result of this, Parliament rejected Mosley’s memorandum.

In May 1930, Mosley informed Labour that he would be leaving the party. A week later, Mosley gave a speech condemning the Labour government’s inaction and stated that he believed that they were incapable of solving the crisis. By resigning from the Labour Party and giving a compelling speech against their economic policies, Mosley demonstrated himself as a skilled orator and won the admiration of many people in Parliament.

In February 1931, Mosley created the New Party as a reaction to the failure of Labour and the Conservatives to react effectively to the economic crisis. However, by 1932, the party had limited political success. Convinced that the economic crisis would continue, Mosley had to take a different approach.

After meeting Mussolini in 1932, Mosley saw that no current political party would be able to solve the crisis and without powerful leadership, the country would deteriorate. He, therefore, abandoned democracy and turned to fascism.

Mosley’s vision was to use fascism to install his economic policies that mirrored Mussolini’s ideas of a corporate state. He believed that they could never be installed in the current political system that was inherently stuck in a pre-war mindset.

Fascism offered him a modern way to deal with the crisis but in order to do so, the political landscape needed to change. In October 1932, Mosley founded his new party: The British Union of Fascists.

The British Union of Fascists

The ideology of the BUF was outlined in The Greater Britain which closely followed Mosley’s Memorandum. Mosley wanted to adapt European fascism to create a version that was distinctly British and remove the negative connotations associated with the ideology. He stated that it did not have to be a despotic rule and that it did not necessarily have to be achieved through violence. Instead, he aimed to install the new ideology through the pre-existing political channels.

Initially, the BUF was not perceived as threatening. With Mosley conducting intellectual debates and speeches and a focus on promoting things such as health and athleticism, the party was not something to be feared.

In the early 1930s, the British public viewed the party with curiosity and was even supported by some members of the press including Viscount Rothermere of the Daily Mail. By 1934, the membership of BUF was 34,000 and many thought that the party would reduce employment.

Unfortunately for Mosley, this view did not last. By 1937, the party had become more violent and held an anti-Semitic rhetoric. Mosley often held party rallies and employed stewards to maintain order. Despite Mosley’s initial claims that fascism was not synonymous with violence, his stewards often used brutal tactics to suppress disruptions. Due to their black uniform, these stewards gained the nickname of the Blackshirts which echoes the Italian Fascist paramilitary wing that went by the same name.

A prime example of the Blackshirts’ violence was at the Olympia Rally in London in 1934. The rally had been attended by 15,000 people including by many anti-fascists who were forcibly removed by the Blackshirts who numbered approximate 2000. It was reported that many of the anti-fascists left covered in blood and verging on collapse. As a result of this outbreak of violence, Mosley was banned from appearing on the BBC for almost 20 years. The events at Olympia solidified the violent reputation of the BUF forever.

Anti-Semitism and Support For Hitler

Mosley also damaged the reputation of his party by declaring his support for Adolf Hitler. This may not have been a wise move on Mosley’s part due to the growing public condemnation of Hitler’s actions including the Night of the Long Knives (1934), which was a violent purge of Nazi officials that had gained too much power.

Mosley’s admiration of the Nazis went so far that he invited Hitler to his second wedding which took place at the home of the Nazi Minister for Enlightenment and Propaganda, Joseph Goebbels. Support for the Nazis in Germany ruined the image of the BUF.

Meanwhile, Mosley was also adopting a more anti-Semitic policy for the party. In 1934, it seems that Mosley somewhat abandoned his original economic goals. From this point onwards he committed the party to the European fascist war against what was known as ‘Organised Jewry’ who he believed to be monopolising economic resources.

The party distributed anti-Semitic propaganda and held demonstrations in Jewish areas of East London, wearing uniforms that resembled those of the Nazis. Clearly Mosley and the BUF had fallen into the typical violent and anti-Semitic stereotype that they had initially tried to avoid.

In 1940, Mosley was arrested and the BUF was banned. He was released in 1943 due to illness and by 1948 he had launched another far-right party known as The Union Movement.

What started out as a seemingly genuine attempt by Mosley to lift Britain out of an economic crisis ended with the BUF mirroring itself with Britain’s Nazi enemy. Like many other fascist leaders, Mosley had wanted to transform his country and its economy to create a better world.

Although he had wanted to distance himself from the violent and anti-Semitic European fascists, his ideology ended up falling into the fascist archetype of violently suppressing opposition and launching an anti-Semitic campaign. Instead of gathering widespread support, the BUF developed itself as an internal enemy that looked a lot like Britain’s external enemy, Nazi Germany. 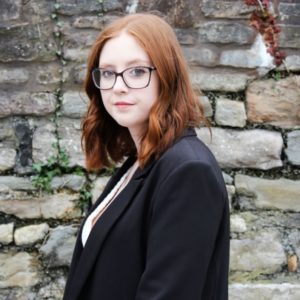 My name is Amy and I run Looking Back at History. I started to love history when doing my GCSEs and then A-Levels all because of some very awesome teachers. I then went on to study History at the University of the West of England.

I started Looking Back at History to continue to my passion and as a platform to share my research whilst I am travelling. I mainly focus on modern European history with a splash of all things political.

Blog: Looking Back at History 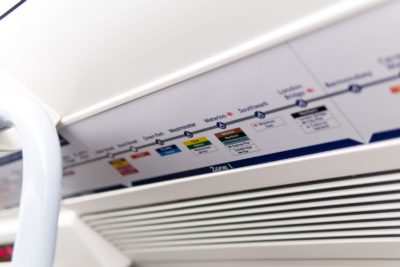 How to Create Mind Maps to Help You Plan, Study and Revise

Time to think the unthinkable: Could Wales ditch Labour? by Andrew G Brown