The Unfortunate Diminishment of the Liberal Democrats by Cameron Lord

After the first leaders’ debate of the 2010 election campaign, “Cleggmania” swept the nation, and it seemed for a moment like the Liberal Democrats were poised to overturn Westminster’s long-established two-party hegemony.

However, after five years in a coalition government their support has plummeted to around 8%, and the party is widely predicted to lose over half of its seats at the next election. In my opinion, this fate is largely undeserved.

There is a gloomy international precedent which suggests an inevitable doom awaits all junior coalition partners, as set by the FDP in Germany, the New Zealand First (NZF) party, the Dutch Democrats 66 and the Irish Greens. They are used as “punchbags for heavyweights”, blamed for all the failings of government and debarred from any justly-earned praise. Therefore, if the Liberal Democrats are to stand a chance of minimising their losses, the first objective of their campaign must be to “shout from the rooftops” about their successes in government.

Raising the basic income tax threshold was a LibDem initiative, and has helped to improve the lives of some of the lowest paid in society. The introduction of the “pupil premium” has ensured educational funding is targeted at those who need it most, helping to reduce the so called “attainment gap”.

The LibDems can also take credit for raising Capital Gains Tax for higher-rate taxpayers, introducing a banking levy, creating a record number of apprenticeship schemes and setting up the Green Investment Bank, all of which were included in their 2010 manifesto. Moreover, you only have to look at some Conservative proposals (withdrawing from the ECHR, further privatisation of the NHS, and drastic cuts to welfare) to see what travesties the LibDems have prevented the government from enacting.

Although most of this moderating influence has been exerted behind closed doors, their blocking of the “snoopers’ charter” provides a very public example of how the LibDems have stood up for what they believe in.

Indeed, the principles of the Liberal Democrats have not been weakened by coalition, but remain as strong as ever.

Liberalism, as their name would suggest, is at the core of everything the LibDems do, driving their attempts to build a better, fairer, and freer society. This is demonstrated by how they seek to transfer control of drug policy from the Home Office to the Department of Health, shifting the emphasis away from penalising addicts to treatment and rehabilitation. They also wish to establish a review to assess the effectiveness of cannabis legislation experiments in the USA and Uruguay, with a view to possibly legalising the drug here.

Moreover, the LibDems want to scrap tax breaks for married couples, ending the government’s paternalistic promotion of traditional lifestyles. Contrast this with Labour, who wished to create compulsory ID cards, introduced control orders and allegedly cooperated with the CIA’s illegal rendition scheme, and also the Conservative policies already mentioned, and it becomes clear that the Liberal Democrats are the only major party committed to the protection of civil liberties.

Furthermore, liberalism also informs LibDem policies over the most salient issues, such as the economy, immigration and the EU. Their decision to block a £270,000 inheritance cut for millionaires and their policy of a mansion tax on properties worth over £2million will help to ensure that the rich contribute their fair share towards cutting the deficit. However, by increasing taxes on wealth as supposed to on income the LibDems are also giving people the freedom to spend more of what they earn, whilst promoting two-way social mobility.

With regards to immigration, the LibDems emphasise the economic benefits that skilled and hard-working immigrants can bring our country, and also recognise the role they play in creating diverse, multicultural communities. They have been at the forefront of combating UKIP’s toxic anti-immigrant rhetoric, which often seems to stem from prejudice and aims to create divisions within society. However, the LibDems also support the reintroduction of exit checks, so the government can better keep track of who is in the country and identify people who are overstaying their visa.

Similarly, although they are by far the most passionately pro-European party in the UK, this does not mean that the LibDems are oblivious to the need for reform. The EU’s Principle of Subsidiarity (that decisions should be taken as closely as possible to the people) has not been properly enforced, and thus the LibDems argue that national parliaments should be given more power to scrutinise proposals, cut back red tape and reallocate wasteful spending. The UK’s relationship with the EU should always be one which yields tangible benefits for the people of Britain.

However, whilst compromise is an inescapable reality of coalitions, I would argue that over the issues of tuition fees and the so-called “bedroom tax” the LibDems should have been more resilient. Yet, cooperation with the Tories was necessary to ensure the stability of this country’s government, and when you credit the LibDems for their achievements and consider their policies for the next election, I still believe they represent the best choice for the British public.

I’m a sixth-form student from Newcastle upon Tyne.

I should be starting a degree in Politics, Philosophy and Economics at Durham University in October (if everything goes to plan!).

My other interests include listening to music and playing drums, watching films and swimming. 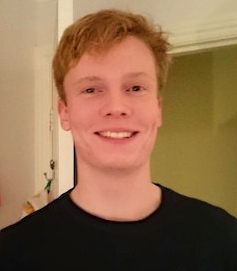