Harold Wilson, Baron Wilson of Rievaulx, KG, OBE, PC, FRS, was a British Labour Party politician who served as the Prime Minister of the United Kingdom from 1964 to 1970 and 1974 to 1976.

He was the son of a chemist and a teacher.

He studied Philosophy, Politics and Economics at Oxford University and graduated with a first class BA.

Wilson became the Labour Member of Parliament (MP) for Ormskirk in 1945 and was elected as the MP for Huyton in later years.

Prime Minister Clement Attlee invited Harold Wilson to become president of the Board of Trade in 1947, at that time, it made him the youngest member of the Cabinet during the 20th Century.

Becoming Leader of the Labour Party

With the Conservative Party, first under Sir Winston Churchill, back in power for a number of years, Wilson held the major shadow positions available to him. These were Shadow Chancellor 1955 -1961 and Shadow Foreign Secretary from 1961 -1963.

A leadership election was triggered by the sudden death of Hugh Gaitskell. Up against George Brown and James Callaghan (who later took over from Wilson) Wilson fought and won the leadership of the Labour Party and Leader of Her Majesty’s Opposition.

Wilson’s first election victory was on 15 October 1964 up against Sir Alec Douglas- Home, the only modern Prime Minister to be selected from the House of Lords. Compared to the huge majorities enjoyed by Tony Blair, Wilson won with a majority of 4. A second election on 31 March 1966 increased this majority to 98.

He who rejects change is the architect of decay. The only human institution which rejects progress is the cemetery.

A week is a long time in politics.

From now on, the pound abroad is worth 14 per cent or so less in terms of other currencies.

We are redefining and we are restating our Socialism in terms of the scientific revolution … The Britain that is going to be forged in the white heat of this revolution will be no place for restrictive practices or outdated methods on either side of industry.

There was less success on tackling unemployment, which crept up to one million on his watch and little movement on solving the troubles in Northern Ireland.

The Economy and the EEC

Wilson oversaw a sterling crisis (currency) due to a budget deficit. In November 1967 he was forced to devalue the British pound.

Although with some reluctance, Wilson knew that he had to look to new markets and arrangements. The first attempt to join the European Economic Community (EEC) in 1967 was not accepted. Wilson then lost the General Election of 18 June 1970 but remained leader of his party. By 1973 the UK had joined the EEC, as he came back into No.10 on 28 February 1974. Wilson oversaw a minority government before another election on 10 October gave him a majority of 3.

Going into the October election, Wilson had promised a referendum on membership of the EEC if they won. The first of its kind, it took place in 1975 and the UK voted to stay buy just over 67%.

Wilson was less ambitious with international policy and spent much of his time balancing the powers around him. For example, he managed to keep British troops out of the Vietnam War, despite requests, but kept the special relationship alive. He also inherited an overstretched, costly defence department and UK military, which had to be skillfully managed. This was especially acute after the decision to withdraw from Suez.

To a genuinely stunned nation on 16 March 1976, shortly after his 60th birthday, Prime Minister Wilson announced that he would be resigning.

James Callaghan then became both Leader of the Labour Party and the next British Prime Minister.

After the 1983 General Election, Wilson was given a new title; Baron Wilson of Rievaulx and took up his place in the House of Lords.

He died in May 1995, suffering from colon cancer. A memorial was held in Westminster Abbey, attended by amongst others Prince Charles and both the current (Sir John Major) and former Prime Ministers. A statue (see left) was put up in his home town of Huddersfield. 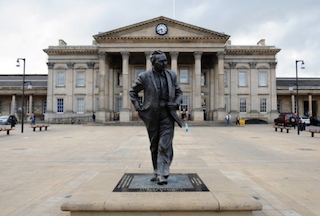