Charles Kennedy, has died at his home in Fort William. His death at 55 is not being treated as suspicious.

In a statement from his family they said, “We are obviously devastated at the loss. Charles was a fine man, a talented politician, and a loving father to his young son.” These sentiments have been echoed by political colleagues and friends.

Charles Kennedy started his political career in the Social Democratic Party (SDP) and became the youngest MP of that time when he was elected aged 23 in the Ross, Cromarty and Skye constituency. He was quickly noticed becoming the SDP spokesperson on social security, health and Scotland and held a number of front bench roles when the SDP merged with the Liberals to form the Liberal Democrat Party.

When now Lord Paddy Ashdown stood down as leader Charles Kennedy took over. Mr. Kennedy led the party from 1999 to 2006 during a very successful period. Under his watch the Liberal Democrats rose to 62 parliamentary seats in 2005, a result not seen since the 1920s. His profile reached its peak during his principled stand of opposition over the Iraq War in 2003. He would repeat this in his opposition to going into coalition with the conservatives in 2010.

Mr Kennedy resigned in 2006, after declaring a long-rumoured battle with alcoholism. He remained an MP, any continued to appear on many TV debate programmes, until the May General Election where he lost his seat to the Scottish National Party. According to Nick Clegg MP, Kennedy, a committed Europhile, was looking forward to getting involved in the European Referendum.

Mr Kennedy’s last tweet, posted two days after he lost his seat at the general election, included the words: “Thank you to the generation of voters, and then some, who put their trust in me.”

“I’m deeply saddened by the death of Charles Kennedy. He was a talented politician who has died too young. My thoughts are with his family.”

“Charles Kennedy was one of the most gifted politicians of a generation, he always spoke with great humour, humility and courage.”

“Charles’ death is an absolute tragedy. He came into Parliament at the same time as me in 1983. He was throughout his time a lovely, genuine and deeply committed public servant. As leader of the Liberal Democrats, we worked closely together and he was always great company, with a lively and inventive mind. I am very saddened indeed by this news.”

“Charles was a friend, colleague and personal mentor. I am desperately saddened by news of his death this morning. His gentle good humour, combined with real courage, enabled him to engage with people who might otherwise have had little interest in politics, and he gave voice to the views of millions as the only mainstream party leader to oppose the Iraq war. His loss will be sorely felt today.”

“He was one of the great talents of his political generation – a wonderful communicator, a fundamentally decent man, never lost his cool. I spent a lot of time working with him. [He] never got angry with people but was immensely persuasive and he will be known, for example, for his stand against the Iraq war.”

“Charles Kennedy was a lovely man, and a highly talented politician. These are the kind of words that always flow when public figures die, often because people feel they have to say those things, and rightly they are flowing thick and fast today as we mourn an important public figure, and a little bit of hypocrisy from political foes is allowed. But when I say that Charles was a lovely man and a talented politician, I mean it with all my heart.”

“Very sad to hear about death of Charles Kennedy – he deserves to be remembered foremost for his judgement & principles opposing the Iraq War.” 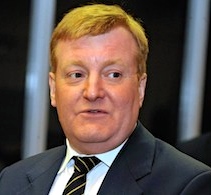