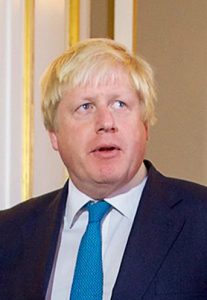 He became the leader of the Conservative Party on 23rd July after beating Foreign Secretary Jeremy Hunt in a leadership contest. The leadership election was triggered by the resignation of Prime Minister Theresa May.

Boris Johnson is also the Member of Parliament for Uxbridge and South Ruislip and served as Mayor of London from 2008 – 2016. Prior to this Johnson was the MP for Henley from 2001 -2008.

On 23 June 2016, the UK held a referendum on whether to remain or leave the European Union. Johnson was a key figure in the Vote Leave campaign. The UK voted to leave the EU and PM David Cameron resigned sparking a leadership contest. It was widely expected Boris Johnson would put his hat in the ring but this did not happen after a scathing attack from his Vote Leave colleague Michael Gove.

Johnson served in May’s Cabinet as Foreign Secretary but resigned as he could not support The Chequers Agreement on how the UK would exit the European Union.

Johnson was born on 19 June 1964 in New York, United States. He was educated at Eton College and read classics at Balliol College, Oxford University.

As well as serving as a Member of Parliament Prime Minister Johnson has had a career as a journalist. He began his career at The Times. Johnson later became The Daily Telegraph’s Brussels correspondent and assistant editor in 1994. In 1999 he left to become editor of The Spectator and held this role until 2005. He has also written several books including about Sir Winston Churchill who he clearly admires greatly.


The Last Prime Minister – Theresa May

Theresa May became Prime Minister of the United Kingdom on 13th July 2016.

This made her only the second female Prime Minister in British history after Margaret Thatcher.

Who is Theresa May?

Theresa had a varied education spanning both the state and private sectors, and both grammar school and comprehensive school.

She started her career at the Bank of England and went on to hold posts at the Association for Payment Clearing Services (APACS) as Head of the European Affairs Unit and Senior Adviser on International Affairs.

Theresa has been involved in politics at all levels for many years, starting out stuffing envelopes at her local Conservative Association before going on to be a councillor in the London Borough of Merton from 1986 to 1994.

During that time she was Chairman of Education between 1988 and 1990 and Deputy Group Leader and Housing Spokesman between 1992 and 1994.

Theresa was elected Member of Parliament for Maidenhead in May 1997.

She lives in the constituency and is an active local campaigner. Her local activity has included campaigns to improve the local train service, bring a minor injuries unit to St Marks Hospital, and improve Maidenhead town centre.

She has held several positions within Parliament since 1997.

From 2002 to 2003 she was the first female Chairman of the Conservative Party.

Theresa was appointed Home Secretary in May 2010.

In this role she lead the Government’s work to free up the police to fight crime more effectively, secure the borders and reduce immigration, and protect the UK from terrorism. She was also Minister for Women & Equalities from 2010 to 2012.

Theresa May became British Prime Minister in 2016 following the resignation of David Cameron. Mr Cameron resigned after the UK voted to leave the European Union.