The late Diana, Princess of Wales was born Lady Diana Frances Spencer on 1 July 1961 in Norfolk. Diana grew up in Park House near Sandringham, Norfolk England and her parents split up when she was young. Diana was first educated at a boarding school at Riddlesworth Hall in Norfolk, then Kent. After attending a Finishing School in Switzerland she held a few jobs before becoming a nanny in London.

Diana and Charles, thirteen years her senior, were officially engaged on 24 February 1981. They had known each other through mutual friends and family since 1977.

Did you know? you can visit Kensington Palace where Diana spent much of her life. They have amazing exhibitions and you can walk through Kensington Park down to Harrods where there remains a tribute to the Princess.

To much anticipation a twenty year-old Lady Diana Spencer married The Prince of Wales at St Paul’s Cathedral in London on Wednesday 29 July 1981. Diana wore a taffeta dress designed by Elizabeth and David Emanuel with a 25ft train. Prince Charles wore his full dress military uniform. During the vows Diana spoke the wrong order for Charles’ middle names.  After the ceremony there was a reception at Buckingham Palace and an appearance on the balcony where the Royal couple kissed in front of a crowded Mall.

The couple honeymooned in Balmoral, Scotland and around the Mediterranean on the Royal Yacht Britannia.

Family was very important to the Princess, who had two sons: Prince William and Prince Henry (Harry). William, Arthur, Philip, Louis was born on June 21 1982. His brother Henry Charles Albert David arrived more than two years later on September 15 1984. The Princes were born in the Lindo Wing of St Mary’s hospital in Paddington where William’s own son, George, was born in the Summer of 2013.

During her marriage the Princess undertook a wide range of royal duties. Diana was very popular on foreign tours and she famously danced with John Travolta in the White House in Washington, but the marriage became strained.

In 1992 the then Prime Minister John Major announced to the House of Commons in Parliament that Prince Charles and Princess Diana had separated. They divorced in 1996.

After her divorce from The Prince of Wales, the Princess no longer carried the title of HRH (Her Royal Highness) but continued to be regarded as a member of the Royal Family. She dedicated herself to her charitable work particularly against the use of land mines and her two sons.   In 1993 the Princess declared that she would be reducing the extent of her public life to have a more balance between her public and private life.

Diana, Princess of Wales died on Sunday, 31 August 1997 following a car crash in Paris. She was 36 years old.

There was widespread public mourning at her death with thousands of people leaving floral tributes at the gates of Althorp House, her childhood home, Buckingham Palace and Kensington Palace where the Princess had lived at the time of her death.

Prime Minister Tony Blair described Princess Diana as the ‘People’s Princess’. Queen Elizabeth II returned from her summer residence, Balmoral, to give a televised address to the nation and in a break from protocol the Union flag was flown at half-mast over Buckingham Palace.

Diana’s funeral was held at Westminster Abbey on Saturday, 6 September 1997. The Princess’ body was followed through the streets by; Prince Philip; Prince Charles; her two sons and also her brother. Guests included actors Tom Cruise, Tom Hanks and Sir Elton John who sang a re-written version of his song Candle in the Wind dedicated to the Princess.

Broadcast to the nation, the eulogy was given by her brother Charles, Earl Spencer to thunderous applause from the thousands of people who had lined the streets. Diana was later buried on an island in the middle of a lake at Althorp House.

Diana’s sons have taken on many of the charities close to their mother’s heart and the engagement of Prince William and Catherine Middleton was sealed with Diana’s sapphire and diamond engagement ring. 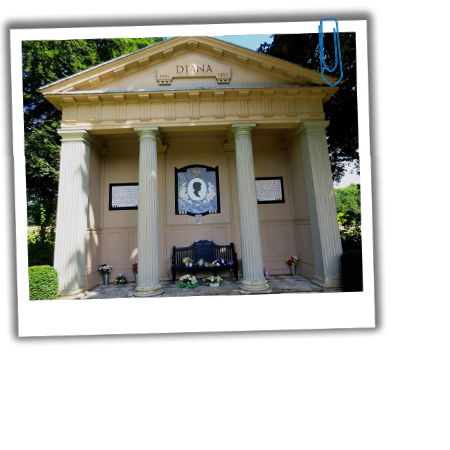