The UK has a little princess. The baby girl weighing 8lbs 3oz was born on 2nd May 2015. The Duchess of Cambridge was admitted to the Lindo Wing in Paddington, London at 6:00am on May 2nd. The Duke of Cambridge, Prince William was present for the birth which took place at 8:34am.

Kensington Palace announced the birth of the Princess publicly, via Twitter, just after 11:00am. This gave the royal couple time to tell their families first. This was followed by a proclamation from a Town Crier and the tradition of placing an easel announcing the birth outside Buckingham Palace. The Queen, who was on an official engagement in Yorkshire, showed her happiness by wearing a bright pink outfit for the day.

In the late afternoon William returned to Kensington Palace to collect their son, Prince George, so he could visit his new sister. Arriving back at the Lindo Wing entrance, George, after refusing to walk in with his daddy, was carried in and waved to the cameras and cheering crowds.

At approximately 6:10pm, The Duke and Duchess appeared on the steps of the Lindo Wing, as they did in 2013, to show the world the new princess. (Live coverage courtesy of Sky News)

After briefly returning inside to place the baby in a car seat they the left the building once more, waving to crowds, and drove back to Kensington Palace to start life as a family of four.The following day, the royal couple received visitors to Kensington Palace in the form of Mr and Mrs Middleton and Pippa Middleton, The Duchess’ mother, father and sister and Prince Charles and The Duchess of Cornwall. Prince Harry, William’s brother commented from Australia that his new niece was “beautiful” and he could not wait to meet her.The couple also took the time to issue a message of thanks via twitter for all the messages of congratulations adding they were “hugely grateful.”

Kensington Palace announced at 6:00am on 2nd May that HRH Duchess of Cambridge had gone into early signs of labour and had been taken to the Lindo Wing at St. Mary’s Hospital, Paddington, London.

Although the Duchess’ due date was never confirmed, Kate did let slip at an event that the baby was expected towards the end of April making the new arrival late to make their entrance. The Lindo wing was also chosen for the birth of their first child, Prince George in summer 2013 and dozens of people camped out for days to get the best spot.

Showing they’re a modern couple, the birth of the baby was announced through Twitter @KensingtonRoyal and hundreds of people followed the account to get the news first. Although keeping with royal traditional an Easel announcing the birth was placed outside the gates of Buckingham Palace.

In keeping with the full process they followed in 2013, the name of the child was not known on the day.

Many, including, Prince Charles, let slip that they hoped for a Princess. The bookies favourites for names include Diana, Elizabeth, Alice and Charlotte. the royal couple decided on HRH Princess Charlotte Elizabeth Diana of Cambridge.

Charlotte is a female form of the name Charles. Elizabeth and Diana are clearly names chosen in reference to the Queen, William’s grandmother and Diana, William’s late mother who died tragically in 1997.

A country life: moving to Norfolk

The Duke of Cambridge, Duchess and their two children will live in Anmer Hall, Norfolk. This rural setting was given as a gift to the couple when they married and it on the Sandringham Estate, where the royals gather at Christmas. This will provide privacy for the couple although they will keep their London residence. William, after paternity leave will take up his position with the East Anglia Air Ambulance, located 50 miles away at Cambridge. 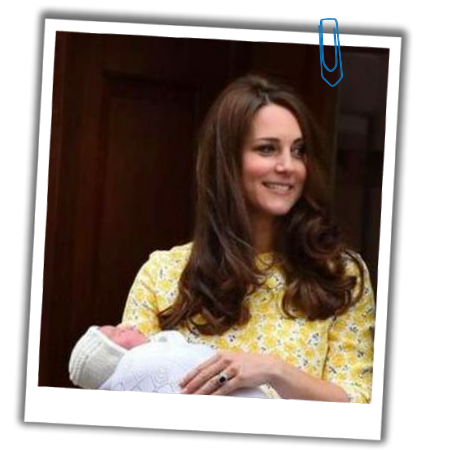