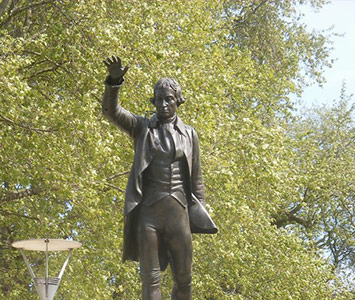 Burke was a politician rather than a philosopher and his writing was often designed to justify the political position of the Rockingham Whigs.

Nevertheless, the period in which Burke lived experienced the ferment of ideas that has been called the Enlightenment and Burke was influenced by these.

Burke followed Adam Smith in believing in the free market and a limited role for the State and opposed the attempt of George III to exercise more power and the British Government’s suppression of the American colonists and the Irish Catholics.

He took up unpopular causes such as rights for Catholics and the abolition of the death penalty and opposition to use of the stocks for sodomy.

Burke followed Locke in seeing ideas as coming from experience rather than reason and the Scottish Enlightenment thinkers in that moral principles are innate in people rather than abstract ideas that existed in themselves.

But Burke went further in arguing that the understanding of what was right and wrong came from tradition and, in particular, could be found in the traditional institutions that had developed over time.

This put him in opposition to the proponents of abstract and universal rights which should be available to all that became the basis of the American Constitution and the French Revolution.

He saw all religions as having their own traditions and defended the Indian princes against the power of the East India Company, given responsibility for governing India, that was only concerned with making a profit.

He rejected the social contract ideas of Hume and Rousseau which implied that institutions could be rebuilt to work better and, instead, propounded the rather mystical idea that society is a partnership between the living and the dead to ensure a gradual evolution.

It is not surprising, therefore, that Burke was the first to see the French Revolution as destroying traditional institutions and spreading ideas of abstract rights, in contrast to the English Revolution of 1688 which he saw as restoring traditional forms of government against the Monarchy’s attempt to establish tyrannical rule.

Although Burke had to exist in the world of patronage, corruption and self-interest that characterised 18th century politics in Britain he always promoted the idea that politics should depend on the arguments between different groups of politicians united on principle.

Burke’s belief in the responsibility of the aristocratic elite to decide what policies were best and protect minorities led him to defend the role of MPs as elected representatives.

In reaction to the speech of his fellow MP for Bristol who had just said that he would do whatever the voters wanted, Burke said that he would, of course, represent their interest in Parliament but, in deciding how to vote, he would follow his ‘mature judgement’ and ‘enlightenment conscience’.

He felt that government needed intelligence and knowledge, and democracy could easily lead to populism and the oppression of minorities. This concept of representative democracy conflicted with those of Rousseau who argued that only direct democracy, in which the people took decisions, is real democracy.

Burke’s life was in the Whig politics of the second half of the 18th century.

The Whigs were not a political party in any sense but were those amongst the elite who supported the creation of a constitutional monarchy in 1688.

They dominated Parliament after the accession of George I in 1715 and consisted of various factions attached to powerful individuals and supported by a system of patronage that bought seats in Parliament and distributed public offices.

In as much as they had any principles, they were acceptance of gradual reform and religious toleration.  Even though Burke was a central figure in the Rockingham faction, he was something of an outsider.

Although he had to become an Anglican to succeed in public life, his mother and sister were Catholics and, growing up in Ireland, he experienced the discrimination against Catholics and the extreme poverty of the mass of the population.

The latter part of Burke’s life was dominated by the two great events of the later 18th century, the American and French Revolutions.

The rebellion of the American colonists in 1775 against financial control from London drew sympathy from the Rockingham Whigs in opposition to the hard-line pursued by Lord North, the Prime Minister, and George III.

The French Revolution in 1789 had, initially, widespread support in Britain as representing the overthrow of the absolute monarchy that had waged war on Britain over the previous hundred years and its replacement by a constitutional monarchy similar to this country.

As the Revolution intensified Burke led the reaction against it.

Burke’s defence of the limited state and his support for minorities has led liberals to see him as a liberal thinker, especially in the United States because of his opposition to the tyrannical government of George III. However, his main influence was on conservatism.

Burke’s opposition to the French Revolution split the Rockingham Whigs with those agreeing with Burke supporting Pitt in the war against France and those such as Fox and Grey who opposed him forming a more progressive group.

Tom Paine wrote his radical Rights of Man as a direct reply to Burke.

Although it is difficult to talk about the existence of Liberal and Conservative parties until the mid 19th century, this began a process of dividing the political class on the basis of ideology, as Burke had wanted, rather than on factional self-interest.

Although rejected as an insubstantial thinker by a Conservative philosopher such as Oakeshott, Burke’s ideas of gradual change, the limits to State intervention and the importance of traditional institutions have been an important part of what has been called One Nation Conservatism that dominated the philosophy of the British Conservative Party from Disraeli to Macmillan.

Burke’s arguments for better government in India developed into ideas of responsible colonialism that were used to provide a moral foundation for British imperialism in the 19th and early 20th centuries.

Burke’s beliefs in representative government have remained significant in the British Parliament.

In recent years the Speaker has used the concept of Parliamentary privilege against anyone, such as interest groups, trade unions or newspaper editors, who have tried to put severe pressure on individual MPs to vote in a particular way.

Although in practice the House of Commons depends on the party system, and Burke would have been horrified at the idea of party whips telling MPs what to do,  MPs continue to quote Burke to defend a decision to vote according to their beliefs and against what their constituents or party are telling them to do.