The First World War – The Battle of Mons

Britain had declared war on Germany on the 4 August 1914 and the first units of the British Expeditionary Force (BEF) had sailed to France a few days later.

By the 22 August the four infantry divisions and one cavalry division of the BEF were moving up from their concentration areas near Maubeuge and were arriving in Mons. Mons was an industrial town in Belgium just north of the French border. The 80,000 strong British force was on the far left of the Allied line next to the French Fifth Army commanded by General Lanrezac. This position had been agreed upon several years before when the British and French military commanders had drawn up contingency plans in the event of a war with Germany.

The German forces were sweeping down through Belgium towards Paris as part of the Schlieffen Plan. The French had been fighting the Germans since the beginning of August in a series of battles known collectively as The Battles of the Frontiers. On the 22 August, as the BEF moved up to Mons, General Lanrezac’s Fifth Army was fighting the Germans at Charleroi. Mons would be one of the last offensives of The Battles of the Frontiers and the first battle of World War One between the BEF and the German Army.

The British Command was initially unaware of just how large a German force was heading towards them. Despite reconnaissance by cavalry patrols and the Royal Flying Corps, British Command severely underestimated the numerical strength of the German forces that were approaching the British lines at Mons. They were facing the German First Army under the command of General Alexander von Kluck. It was the largest of the German Armies and the BEF were outnumbered 3 to 1.

Read about Victoria Cross winners in this battle here.

On the 22 August cavalry patrols were sent out to reconnoitre the area and try and locate the enemy. Several skirmishes with German units were reported. It would seem that these encounters also alerted the Germans to the presence of the BEF.

Early on the morning of Sunday 23 August German artillery began shelling the canal. The British positions followed the bend in the canal to the north of Nimy which created a salient (an area of the battlefield which sticks out into enemy territory and so can be attacked from three sides) and was therefore a weak point in the British line. This area was held by the 4th Battalion Royal Fusiliers with the 4th Battalion of the Middlesex on their right near Obourg. The Germans concentrated their attack on this weak point. Heavy casualties were inflicted on the advancing German infantry as the Royal Fusiliers and Middlesex kept up rapid-fire with their Lee-Enfield rifles. Many of the BEF were reservists who had been called up on the outbreak of war, but they were all well trained soldiers some of whom earned extra pay as marksmen.

As the day went on the German attack began to spread westwards along the line of the canal. British positions on the canal bank at Jemappes and Saint Ghislain, which was around 12km west of Mons, came under heavy enemy fire.

Soon after midday the Germans crossed the canal at Obourg where the 4th Middlesex and 2nd Royal Irish were engaged in a brutal battle. They began to fall-back during the afternoon. Almost half of the 1600 casualties at the Battle of Mons came from these two regiments. (image from www.monlib.org.uk)

The 4th Royal Fusiliers were also ordered to withdraw. The battalion’s two machine guns covering the railway bridge at Nimy were obvious targets for the German guns. Lt Maurice Dease died of wounds he received trying to keep them in operation. Private Sidney Godley volunteered to man the last machine gun and cover the Royal Fusiliers as they fell-back under heavy fire. Dease and Godley were subsequently awarded Victoria Crosses for their actions.

The Germans were crossing the canal in greater numbers, by the end of the day they had captured Mons.

Throughout the afternoon and early evening units were being ordered to withdraw and take up positions further back. The British intended to strengthen the line that they now occupied during the night, ready for an attack the following day. However, the French forces holding the line to the right of the BEF had also fallen back causing a gap to open up which exposed the British right flank. When the British Command received word that the French Fifth Army was going to withdraw during the night, Field Marshall Sir John French Commander in Chief of the British forces had no choice but to order a general withdrawal as well.

The Retreat from Mons

Read about Private Patrick Fowler. The soldier who spend the war in a wardrobe.

The BEF fought their way from Mons. As the British units fell back, rearguards took up positions to cover their retirement and delay the enemy, before withdrawing to follow them.

On the 24 August men of the 1st Cheshires and 1st Norfolks were holding a one mile line between Elouges and Audregnies. They were covering the withdrawal of the British 5th Division. When the German infantry launched their attack the cavalry of the 4th Dragoon Guards and the 9th Lancers charged. Stumbling over the rough terrain and held up by the barbed wire fences surrounding the fields, the cavalry were easy targets. The British field guns were saved, most of the 1st Norfolks were able to fall back but the 1st Cheshires never received the order to withdraw and so continued to hold on and fight. The majority of the battalion was lost. The action at Elouges had delayed the German advance and given the BEF the time it needed to retreat south.

As the Germans advanced so the local civilian population began to panic and flee the towns and villages. The roads south were clogged with refugees bringing with them as many of their possessions as they could. To this was added the men of the BEF, along with all of their equipment in the military baggage trains. The going was slow, with frequent hold ups. Units were scattered and men became separated from their regiments. Some units received supplies others had to rely on what they found in the passing villages and in the fields and woods. This applied equally to the rations for the horses as well. The weather was hot and thundery with frequent heavy downpours. The men were exhausted and foot sore often only getting two to three hours of sleep a night.

Two days into the retreat from Mons the BEF approached the Forest of Mormal which they were forced to go around. First Corps took the road to the east and General Haig set up his headquarters at Landrecies. Second Corps moved around the western edge of the forest towards Le Cateau. After a skirmish at Landrecies, which the British believed to be a lot more serious than it actually was, Haig moved his headquarters further to the south and First Corps continued their retreat. A significant gap was developing between the two British Army Corps.

The Battle of Le Cateau

The German First Army was close behind the retreating Second Corps. General Haig’s First Corps were several miles to the east. Smith-Dorrien did have the 4th Division which had only just arrived in France. It had been held back in Britain due to fears of a German invasion. However, the men of the Second Corps were exhausted and their units in disarray. It became obvious that the retreat could not continue in this manner as there was a strong possibility they would be overrun and defeated. On the night of the 25 August Smith-Dorrien decided to make a stand and fight.

Smith-Dorrien positioned Second Corps to the west of Le Cateau, with the 4th Division on their left flank. The terrain to the west was mainly open countryside and farmer’s fields with a handful of small villages.

Early on the morning of the 26 August the German artillery began shelling British positions. The British forces of around 40,000 men were outnumbered and outgunned. The fighting was intense but they held back the Germans for most of the morning, inflicting heavy losses.

Much of the British field artillery was lined up out in the open, up-front with the infantry, which made the gun batteries obvious targets. The field artillery played a significant role at Le Cateau, but casualties were high. Not only were the guns frequently shelled and fired upon, but when the order came to save the guns the gun teams had to dash in with the horses and limbers in full view of the enemy.

Four of the five Victoria Crosses awarded for the action at Le Cateau went to men who had helped save the guns. Drivers Job Drain and Frederick Luke of the 37th Battery Royal Field Artillery were each awarded the Victoria Cross for volunteering to help save the guns while “under fire from hostile infantry who were 100 yards away”.

During the afternoon the British troops began to retire and fall back. The intense shelling and the rifle and machine gun fire hindered their progress. Not all units received the order to withdraw, the messengers unable to reach them. A contingent of French cavalry and their 75mm guns (the famous French soixante-quinzes) under the command of General Sordet helped cover the British left flank. The fighting continued until nightfall by which time most of Second Corps had withdrawn from the battlefield.

Major Charles Yate of 2nd Battalion King’s Own Yorkshire Light Infantry was awarded the Victoria Cross. He “commanded one of the two companies that remained to the end…when all other officers were killed or wounded and ammunition exhausted, led his 19 survivors against the enemy in a charge in which he was severely wounded.”

Le Cateau is generally regarded as a tactical victory. It temporarily halted the German advance and most likely prevented the loss of the Second Army Corps. The Germans themselves were exhausted and had suffered many casualties. Although they fought a few rearguard actions the BEF were able to continue their retreat until a counter-offensive was launched 200km to the south at the Marne. 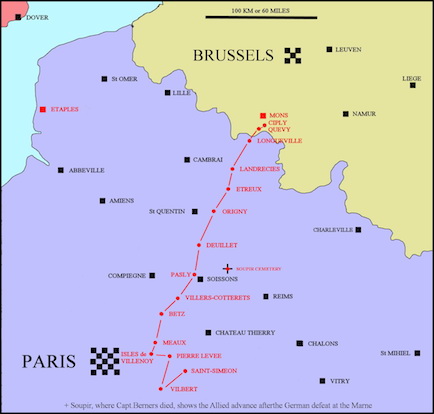