The First World War – The First Battle of the Marne

The French were retreating south towards the River Marne where their Commander in Chief General Joseph Joffre was planning to launch a major counter offensive against the Germans. By mobilising men in the reserve divisions and redeploying some of his troops, Joffre created a new Sixth French Army on the extreme west flank to the north of Paris. Joffre needed the British Expeditionary Force (BEF) to fill the gap between the French Sixth Army on their left and the French Fifth Army on their right.

The BEF had been in retreat from Mons for almost two weeks. The British Commander in Chief Field Marshall Sir John French wanted to withdraw the BEF south of the River Seine so that they could rest and recuperate. He was also considering heading for the coast and withdrawing the British forces from the war altogether.

On the 1 September Lord Kitchener the British Secretary of State for War went to Paris to meet with Sir John French and General Joffre. It was agreed that the BEF would remain in the front line and take part in Joffre’s counter-offensive. Sir John French felt that Lord Kitchener had undermined his authority by coming to France, particularly as he had arrived wearing the uniform of a senior Field Marshall. On the 5 September the BEF finally stopped their retreat from Mons.

Air reconnaissance by the Royal Flying Corps showed that the German First Army commanded by General Alexander von Kluck had changed direction. Instead of heading directly towards Paris his army was now moving towards the south east. Von Kluck’s army would miss Paris and pass it to the north east. His intention was to support General Karl von Bulow’s Second Army in his pursuit of General Lanrezac’s retreating French Fifth Army and defeat the French left wing. They were either unaware or unconcerned by the new French Sixth Army that was being formed north of Paris, behind von Kluck.

German High Command was also preparing to launch an offensive against the French right wing to the east at Nancy. The German Emperor Kaiser Wilheim was expecting an imminent German victory and had arrived at the Front.

On the 6 September the Allied forces began their offensive along a one hundred mile front. The German First Army had turned to face General Maunoury’s French Sixth Army near the town of Meaux in the Marne valley.

General von Kluck transferred men from his left, who were facing the BEF, to reinforce his right flank and launch a counter attack against Maunoury’s Sixth Army. In turning, von Kluck had opened up a gap between his First Army and General von Bulow’s Second German Army. (Image courtesy of www.eoearth.org)

The BEF were advancing but they had started several miles behind the French and their going was slow, even though they encountered very little German resistance. It was the French who were doing most of the fighting. They would incur about 250,000 casualties during the Battle of the Marne. The German losses would be of a similar magnitude. British casualties would be officially recorded as 1,701.

On the night of 7 September reserve infantry units were sent from Paris to reinforce the Sixth Army. General Gallieni was the military governor in charge of the armed garrison defending Paris. He famously requisitioned several hundred civilian motor vehicles, the ‘taxi cabs of the Marne’, to help transport these reinforcements to the Sixth Army as quickly as possible.

Although the French had made initial gains by the beginning of the 8 September General Maunoury’s Sixth Army and General Foch’s Ninth Army further to the east were struggling to hold their lines against the German counter-attacks.

Under sustained attack from the French Fifth Army of General Franchet d’Esperey (General Lanrezac had been relieved of his command) the right wing of General von Bulow’s Second Army began to pull back, widening the gap between the two German armies. It was towards this gap that the BEF were heading. By the evening of the 8 September the BEF had crossed the Petit Morin River having successfully driven back the German troops who were defending the river.

The BEF fought their way across the Marne. First and Second Corps crossed on the 9 September, Third Corps the day after. The Royal Engineers had to construct a pontoon bridge under heavy fire to enable Third Corps to cross the river as the bridge at La Ferté-sous-Jouarre had been destroyed.

On the 9 September the German First and Second armies were ordered to retreat from the Marne. This was an ordered, if hasty, tactical withdrawal. The German units fought rearguard actions with the advancing Allied forces, although the Allied pursuit was slow.

The Germans were exhausted. They had been on the march and fighting for days and their supply lines were stretched. There also seems to have been a breakdown in communication between von Kluck and von Bulow and between German High Command at their headquarters in Luxembourg. German Chief of Staff Helmuth von Moltke feared that the Allied forces were about to break through the German lines. He was particularly worried that the BEF would exploit the gap between the First and Second armies. When it was decided that von Bulow’s Second Army should withdraw, von Kluck had no choice but to withdraw his First Army as well. The Germans were also greatly surprised by the strength of the Allied counter-offensive. They thought that they would be facing a beaten army on the run.

The French called it the Miracle on the Marne. Paris had been saved, France was still in the war and the Germans had been forced to retreat. However a large part of northern France, the country’s industrial heartland would be occupied by the Germans. The Germans would make full use of these resources for their own war effort.

For the Germans it was the end of the Schlieffen Plan and the great sweep down through Belgium and France. They had come within thirty miles of Paris but there would be no quick victory. General Helmuth von Moltke was relieved of his command as Chief of Staff and was replaced by General Erich von Falkenhayn.

The German armies retreated towards the River Aisne where they took up defensive positions on the higher ground and began to dig in.

The Battle of the Marne represented the end of the war of movement. It was at the Aisne when the trench warfare that would characterise the Western Front for the remainder of the war began. 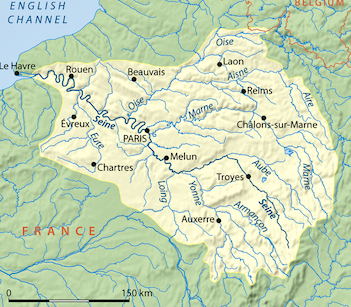