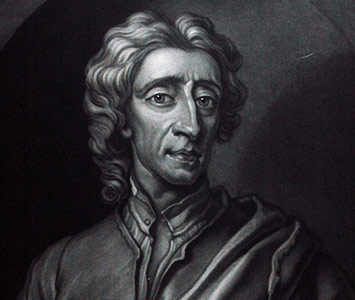 Locke developed a view of individuals who were self-aware and self-reflective, developing in interaction with other people.

In a state of nature all were equal and, unlike Hobbes, who saw conflict as constant and an authoritarian ruler as essential, Locke saw individuals as possessing reason and tolerance and able to develop a social contract that would allow civil society to resolve conflicts.

Another contrast with Hobbes was that Locke sought to put his theory of individual liberty in the context of Puritan thought. A view was developing by the late 17th century that natural rights developed by custom from the interaction of people in institutions.

Locke, instead, held that they were given by God who commanded people to enjoy life, liberty and property (not the modern sense of property but meaning all that makes up one’s enjoyment of life) and also to make use of the fruits of nature for oneself and for the benefit of others.

If anyone tries to take away these inalienable rights from someone else, the latter can retaliate. This conflict can be ended by the parties in a state of nature but it also provides an incentive to develop government to deal with disputes.

Locke wanted to refute the ideas of monarchical power of Sir Robert Filmer and also to justify the constitutional monarchy created in 1688 and so he looked to set limits to the State.  He does this by separating the moral from the political.

Although he never clearly defined what a right is, he states that individuals have a moral duty to protect their inalienable rights, to expand their property and to do what is best for others.

Natural law commands them to avoid war, educate their children, look after the poor, only take what they need for themselves, and so on.

Individuals may not do this but this is a transgression of natural law and their choice, not necessarily something that the State should punish. State intervention must be based on the common good and this is not some abstract idea of the public interest but is defined by the benefit to individuals in aggregate.

If the State tries to take away people’s inalienable rights then they have a right to resist and overthrow the Government that does this.  Locke was particularly clear that the State could not evaluate competing religious views or try to care for the souls of individuals.

Locke looked at the moral basis of the Capitalist system that was developing in North-West Europe. Using his ideas of natural law he held that the fruits of the earth in a state of nature belonged to all.

However, it was also part of God’s will that individuals through their labour create the means of life, or property as he called it, and different individuals would inevitably produce different amounts of property. Labour is therefore the source of wealth.

It was morally wrong, though, for anyone to take more than they needed or destroy goods that could be used for the benefit of others.  The invention of money changes this because it allows individuals to accumulate more than they can consume and this is not wrong as long as they use it to create more wealth overall, which was in accordance with natural law.

If someone can use their wealth to employ others then this gives their workers a better life than they could have created for themselves.

The laws of supply and demand can then work for the benefit of all but Locke saw moral limits to this so that, for example, if selling food at the market prices meant that people starved because they could not afford to buy then that is wrong.  Wealth can be used to create more wealth but it must also be used for the common good.

Locke was writing in the period after the English Civil War, but when the future of the British political system was in flux between the development of a Constitutional Monarchy and a return to the absolutism of Charles I.

Locke was the doctor for Lord Shaftesbury, a founder of the Whig Movement which supported constitutionalism and the defence of traditional liberties.

Locke fled from Britain after the plot to kill Charles II and his Catholic brother James and returned when the Dutch Prince William and Charles’s niece Mary accepted the settlement of 1688, which established the rights of Parliament.  Locke was also influenced by the ferment of religious ideas of the first half of the 17th century.

Both his parents were Puritans. Puritans believed that people existed for the glory of God and should live a moral life both in their own actions and in fulfilling communal obligations to others, rather than depend on instruction from the Church hierarchy.

When Charles II imposed the Anglican Book of Prayer in 1662, Puritans left the Church and many emigrated to the New England colonies taking Puritan and Constitutional ideas with them.

However, the Church of England did not impose strict control in matters of doctrine and there was a latitudinarian movement, some of whose members Locke was in contact with, that believed in the importance of individual morality and religious tolerance.

Find out more through these great books (paid links)

Since the middle ages, the predominant view of rights  was that they were traditional and based on locality or position in society.  Locke gave impetus to the idea of rights residing in all individuals, that is one of the bases of modern liberalism, and tried to define the balance between these rights and any power that government might have over individuals.

Libertarians, who emphasise the primacy of individual liberty, also claim Locke but, as we have seen, he put limits on individualism in both a moral sense, because of God’s creation of natural law, and in a legal sense, because Government can give priority to the combined interest of individuals over any single individual interest. Locke’s contribution was to try to set out the balance between individual and public interests which has been debated ever since.

Locke’s hostility to monarchical power and his justification of individual freedom and, to a degree, his religious view of natural law, fitted the demand of the American colonists in their struggle against the British Crown.  Although there is some disagreement, many writers refer to the impact of Locke’s thought on the principles in the American Declaration of Independence.  Locke’s defence of religious freedom had an impact on both sides of the Atlantic and is to be found in the separation of Church and State in the American Constitution.

Locke looked at the basis of the capitalist system that had begun to develop from the 17th century and began to grapple with the issues that political economists elaborated over the next 150 years.

His ideas of the labour theory of value, the laws of supply and demand, and the nature of property are taken up by Adam Smith, David Ricardo and Karl Marx, though with different conclusions in each case.

The idea that the capitalist economy works to produce benefits for all and is, indeed, ordained by God provided moral security for the new manufacturers of the late 18th and early 19th centuries, many of whom were devout Nonconformist Christians. Adam Smith expands the idea of capitalism as wealth-creating and strips it of its religious origin but keeps the idea of an ‘invisible hand’ that ensures the market works so as to benefit all.

Locke’s main works were Two Treatises of Government which covers economic and political matters, Letters Concerning Toleration which advocates religious freedom and An Essay Concerning Human Understanding which sets out his theory of the mind.