The original Magna Carta or Great Charter of 1215 was essentially a peace treaty between King John and his Barons.

It was originally known as the Charter of Liberties. The Barons wanted to ensure that King John’s misuse of the justice system and his exploitation of feudal rights, primarily to raise money, would end.

They wanted to protect in law their customary rights and liberties.

The Barons also sought to limit the authority of the King.

The King should be subject to the law and not arbitrarily impose his will.

It made clear the rights of the Church and other groups including merchants and knights.

The liberties were granted to all the ‘Freemen’ of the kingdom.

Free men did not mean everybody. There were many peasants who were serfs or villeins and so not classed as free men.

The original document was written on parchment in Medieval Latin and was laid out as single piece of text.

The rights of the Church were set out in Chapter 1. Some of the liberties dealt with taxes, particularly scutage, which had been the main source of discontent between King John and the Barons.

Chapter 14 of the Charter stated that a ‘common council of the Kingdom’ made up of high ranking religious officials as well as the leading Barons needed to be consulted with, before the King could raise taxes.

The Barons were asserting their feudal rights to be part of the Great Council and advisors to the King.

King John’s abuse of the justice system was also dealt with. Men who carried out judicial functions, such as bailiffs or sheriffs, had to know the law of the land and carry it out properly.

Chapter 39 was to guarantee that ‘no Freeman shall be taken or imprisoned or be disseised [deprived of property]…or be outlawed, or exiled, or in any other way destroyed; nor will We not pass upon him… but by the lawful judgment of his Peers or by the Law of the Land.’

Chapter 40 went on that ‘We will sell to no man, we will not deny or defer to any man either Justice or Right.’

This clause also appears in the 1297 version of the Magna Carta, when King Edward I confirmed the Charter drawn up during the reign of King Henry III. It has not been repealed.

This clause took on greater significance long after the signing of the Magna Carta and probably much more than when it was first written.

It formed the basis for the legal concept of habeas corpus. An individual’s freedom should be protected from arbitrary actions of the state

In Chapter 13, the City of London and other cities and towns were guaranteed to ‘have all their Liberties and free Customs’. This clause has also not been repealed.

Most of the clauses deal with specific issues where customs or traditional rights have been exploited or abused.

Chapter 61 stated that twenty-five Barons were to be appointed to ensure that the conditions of the charter were observed by all, including the King.

The Royal Chancery drew up formal copies of this Charter and sent them out to officials throughout the country.

King John did not accept the conditions of the Charter as it attempted to limit his royal authority. He tried to have it annulled by appealing to Pope Innocent III.

The Pope sided with King John and released him from any obligation to abide by the terms of the Charter.

Civil war broke out again. Within only a few months King John’s forces had defeated the rebels and their allies in most parts of England.

The rebels looked to France for assistance.

In return for helping defeat King John they offered Prince Louis the throne of England.

Prince Louis, son of King Phillip II, laid claim to the English throne through his wife Blanche of Castile. Blanche was a descendant of Henry II.

In 1216 Prince Louis landed with his armies in England.

In October 1216, King John died at Newark, probably of dysentery. He was buried in Worcester Cathedral.

Many of the rebel Barons turned to support the new king. Prince Louis returned to France.

The Magna Carta was edited and re-issued to set terms for the governance of the country and to try and prevent another civil war.

Four copies of the original Magna Carta 1215 still exist. Two are held at the British Library. One copy is held at Salisbury Cathedral and the other at Lincoln Cathedral.

A translation of the Magna Carta is available on the British Library website. 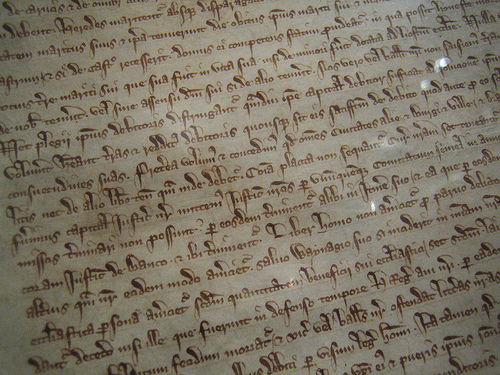