Millicent Garrett was born in 1847 in Aldeburgh, Suffolk. She was the daughter of Louisa Dunnell and Newson Garrett. Her father was part of the Garrett family of Leiston who ran a successful engineering business. Newson had acquired his own wealth as a merchant, owning a small fleet of trading ships. He also owned a malting business at Snape. The family would live at Snape during the winter and at Aldeburgh in the summer. Elizabeth Garrett Anderson, the first female British doctor, was an elder sister.

Millicent was educated at a private boarding school, Blackheath, in south London. The school was run by Louisa Browning, aunt of the poet Robert Browning.

Millicent would go to London to visit her elder sister Louisa Garrett Smith. Louisa and her husband took Millicent to an election meeting in 1865. It was here that Millicent first heard John Stuart Mill speaking. Mill was an advocate of women’s suffrage. In 1867 Mill tried to bring in an amendment to the Reform Bill that would allow women to be given the vote.

Millicent was introduced to other supporters of women’s rights. This included Henry Fawcett the Liberal MP for Brighton and a Professor of Political Economy at Cambridge University.

In April 1867 Millicent married Henry Fawcett. In April 1868 they had a daughter Philippa.

Henry was blind, having been injured in a shooting accident, so Millicent helped her husband in his career. Acting as his personal assistant, Millicent would take notes and read and write for him. Millicent would also listen from the Ladies’ Gallery in the House of Commons to the important debates.

Henry and a publisher friend encouraged Millicent to write herself. Millicent wrote several journal articles and books, including ‘Political Economy for Beginners’ which was very well received.

Both Millicent and Henry strongly believed in the right for women to have access to education. Their support helped to establish Newnham College, Cambridge. Their daughter Philippa would later attend the college.
Millicent had been interested in women’s rights from an early age. Her elder sisters Louisa Garrett Smith and Elizabeth Garrett Anderson were both active members of women’s rights groups.

Millicent first became an active participant in promoting women’s rights when she joined a suffrage group, the London National Society for Women’s Suffrage in 1867. The Society met at Aubrey House and Millicent was a member of the executive committee.

Millicent gave her first major speech on the enfranchisement of women in 1870 in Brighton, her husband’s parliamentary constituency. In 1871 Millicent went on a lecture tour, promoting women’s suffrage. In 1874 Millicent joined the Central Committee of the National Society for Women’s Suffrage.

Henry Fawcett fell ill and died of pneumonia on 6 November 1884. Millicent received many letters of sympathy including a personal letter from Queen Victoria.

Millicent went to live with her sister Agnes Garrett at 2 Gower Street, London. Agnes ran her own interior design company and was a campaigner for women’s suffrage.

After Henry’s death, Millicent spent more of her time supporting the women’s rights movement. With her experience and knowledge, Millicent chose to campaign for the political status of women. If women were part of the electorate the government would be more inclined to act on their demands.

As well as suffrage, Millicent also supported organisations that dealt with moral reform, child welfare and the protection of vulnerable women.

In 1885 Millicent joined the General Council of the National Vigilance Association. The editor of the Pall Mall Gazette, WT Stead had published a series of shocking articles on the trafficking of children for prostitution. This had put pressure on the government to pass a Criminal Law Amendment Bill. The National Vigilance Association was set up to try and achieve this. It aimed to enforce and improve the laws against ‘public immorality’ and ‘criminal vice’, and thereby help vulnerable women and children. Josephine Butler, who had led the campaign against the Contagious Diseases Acts, was a member of the General Council. Stead also joined the General Council. He was to die with the sinking of the Titanic in 1912.

During the Boer War, internment camps had been set up for the civilian Boer population. Emily Hobhouse had reported on the appalling conditions in the British camps in South Africa.

In 1901 Millicent was invited to join a small group of women who had been selected by the British Government to inspect these camps. The Fawcett Commission visited most of the camps and made numerous recommendations for improvement.

Millicent returned to South Africa in 1903 to visit her daughter who was helping to set up an education program.

The NUWSS was formed in 1897. It was made up of a collection of societies each of which promoted the establishment of suffragist groups and campaigned for the enfranchisement of women, within their region. The role of the NUWSS was to co-ordinate these existing societies and to help develop a national strategy for getting women the vote.

The aim of the NUWSS was to get the vote for women through peaceful, constitutional means. They tried to get public support to persuade the Government to change the Law.

In 1903 the Women’s Social and Political Union (WSPU) was founded. Millicent did not agree with the tactics used by the WSPU, believing that their militancy would hinder the campaign for women’s suffrage. Millicent did, however, admire their courage and was most critical of the government and their unnecessarily violent and inhumane treatment of the suffragettes.

In 1906 Millicent helped organise a banquet at the Savoy Hotel. It was held to welcome home members of the WSPU, including her friend Anne Cobden Sanderson, who had recently been released from Holloway Jail. They had been sentenced to two months imprisonment for protesting at the House of Commons. Millicent was criticised by many for doing this, but she believed that their self–sacrifice should be publicly recognised.

In February 1907 Millicent co-lead what became known as the Mud March. Over 3000 women marched in a public procession through the muddy streets of London, peacefully demonstrating their support for women’s suffrage. In June 1908, 15000 women marched through London to the Albert Hall.

In 1908 Herbert Asquith became Prime Minister. Although Asquith was a Liberal he was a strong opponent of giving women the vote. Millicent regarded Asquith as the suffragist’s main adversary in the Liberal Party.
The NUWSS had been set up along non-party lines. It included members from all political parties. During elections the NUWSS would campaign for the electoral candidate who best supported their cause, irrespective of his political affiliations. The defeat of the Conciliation Bill demonstrated that a change in policy was required. As President, Millicent supported the implementation of the new policy. The NUWSS would now campaign against those candidates already in government (with the exception of a few loyal supporters) and would support those candidates whose party officially endorsed women’s suffrage. The NUWSS established an Election Fighting Fund to achieve this.

The Labour Party was the only Party to officially pledge their support for women’s suffrage. The NUWSS campaigned for Labour candidates at several by-elections from 1912 to 1914.

In 1913 the NUWSS organised the Pilgrimage. Non-militant suffragists from all over the country marched towards London. They met up in Hyde Park on the 26th July where a mass rally was held. It was estimated that over 50,000 people were there. Millicent as President of the NUWSS was one of the main speakers. One of the aims of the Pilgrimage was to demonstrate the support the women’s suffrage campaign had.

When war was declared in August 1914, the NUWSS suspended its political activities. Millicent refused to argue against the war with Germany. This led to disagreement amongst the leaders of the NUWSS, some of whom wished to support the Women’s Peace Conference in The Hague in 1915.

As President, Millicent called upon the members of the NUWSS to help the country in any way they could, to get it through this time of ‘strain and sorrow’. It would show the country that women were ‘worthy of citizenship’ even though this had not been officially recognised.

In 1918 the Representation of the People Act was passed. This gave the vote to women over 30, subject to a property qualification.

Millicent was in the House of Lords to witness the Royal Assent being given to the Act, in February 1918.
In 1919 Millicent resigned as President of the NUWSS. She was succeeded by Eleanor Rathbone.

In 1919 Millicent was invited to represent the NUWSS at a women’s conference in Paris. Representatives were sent from all the Allied nations to try and promote the welfare of women and children to the delegates attending the Peace Congress. Millicent had meetings with many of the key figures, including President Wilson.
Millicent still supported issues relating to women’s rights and welfare. She remained a member of the National Union (now called the National Union of Societies for Equal Citizenship), until a disagreement over policy led to her resignation.

Millicent continued to write books. These included ‘Easter in Palestine 1921-22’, about her travels to Palestine with her sister Agnes; a book about the suffrage movement, ‘The Women’s Victory and After’ and her autobiography ‘What I Remember’.

In 1924 Millicent became a Dame when she was awarded the Grand Cross of the Order of the British Empire.
Dame Millicent Garrett Fawcett died on 05 August 1929.

A memorial to Millicent and her husband Henry lies in the chapel of St George in Westminster Abbey.#

In 1953 the London and National Society for Women’s Service was renamed the Fawcett Society. This was in recognition of the important role Millicent had played in the constitutional women’s suffrage movement. The Fawcett Society is still in existence today campaigning for equality between men and women. 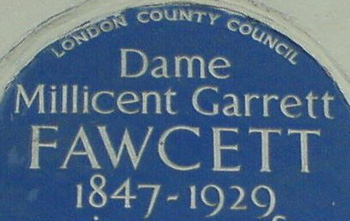