Prince Harry is the younger son of The Prince of Wales and Diana, Princess of Wales.

In September 1992, Harry joined his older brother William at Ludgrove School in Berkshire.

He then attended Eton College from September 1998 where he took his GCSEs and A-Levels.

After completing his A-Levels, Prince Harry took a gap year during which he visited Australia, Argentina and Africa, where he made a documentary about the plight of orphans in Lesotho.

Prince Harry entered the Royal Military Academy Sandhurst in May 2005.

He completed a 44-week training course as an Officer Cadet, before being commissioned in April 2006 as a Second Lieutenant in the Household Cavalry (Blues and Royals).

During this period, Prince Harry co-founded the charity Sentebale with Prince Seeiso of Lesotho in memory of their mothers to support orphans and vulnerable children in Lesotho. ‘Sentebale’ is the Sotho word for ‘Forget me not’.

In February 2008 Prince Harry completed more than two months service with the British Army in Helmand province, Afghanistan, as a Forward Air Controller for NATO forces.

Prince Harry was promoted from Second Lieutenant to Lieutenant in April 2008.

In January 2009 he began a two-and-a-half-year training course to become a fully operational, full-time Army Air Corps helicopter pilot. He remains an officer in the Household Cavalry during the training period.

Prince Harry was ‘best-man’ to his elder brother Prince William, Duke of Cambridge on 29 April 2011 for his marriage to Catherine (Kate) Middleton now Duchess of Cambridge.

Harry became an uncle for the first time in 2013 to Prince George of Cambridge, their son and again to Princess Charlotte.

The wedding took place on 19th May 2018 at St George’s Chapel, Windsor Castle.

In March 2020 Harry formally stepped down from royal duties, effectively leaving the royal family to become financially independent and a private citizen. This became known in the British media as ‘Megxit’. At the time of writing, although the HRH was removed he retains his title The Duke of Sussex. He lives in California pursuing new private ventures as well as retaining some he had been involved with for a long time such as The Invictus Games. 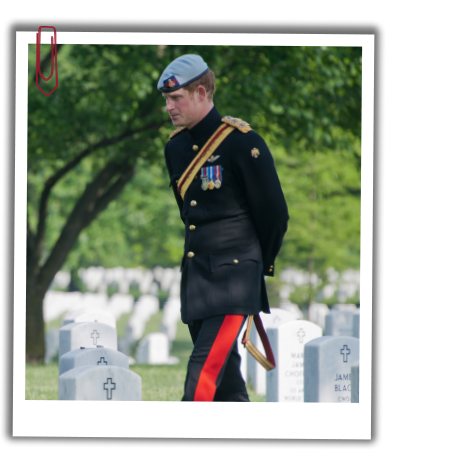