Winston Churchill was the child of Lord Randolph Churchill a well regarded English Statesman and member of the British Aristocracy and a New York socialite named Jeannie Jerome.

Churchill grew up in Dublin, Ireland, where his father worked for his grandfather John Spencer-Churchill the 7th Duke of Marlborough.

A key figure in the young Churchill’s life was his nanny Mrs. Everest whom he fondly referred to as ‘woomany’ and was later in his life quoted as saying “My nurse was my confidante.

Mrs. Everest it was who looked after me and tended all my wants. It was to her that poured out all my many troubles”.

The early education of Winston Churchill can most readily be described as troubled, with numerous problems arising from Churchill’s independent and rebellious nature.

It was not until later when Churchill attended Preparatory School and Harrow Boarding School that he developed a love of learning and the military.

In his later life Churchill got married and began a family of his own.

On 2 September 1908 he married Clementine Hozier and had 5 Children Diana, Randolph, Sarah, Marigold and Mary.

Churchill in the Military

After leaving Harrow Boarding School, Churchill applied to the Royal Military College at Sandhurst and was eventually accepted after failing the admittance exam three times and passing upon his fourth attempt.

Churchill was then accepted into the Cavalry and graduated after taking the standard three term 18 month course.

At this stage Churchill was presented with the option of transferring to the infantry as his father would have wanted but chose to stay on with the cavalry and was commissioned as a Second Lieutenant in the 4th Queen’s Own Hussars on the 20 February 1895 after rising through the ranks and earning several accolades.

In 1941 he received the honour of Colonel of the Hussar’s.

Churchill’s first Military engagement was in Cuba when he was sent to observe Spanish troops in quelling an uprising in the then Spanish colony.

Under General Valdez the unit Churchill was attached to quickly saw action with Churchill commenting “The 30th of November was my 21st birthday and on that day for the first time I heard shots fired in anger and heard bullets strike flesh and whistle through the air”.

Churchill’s time in Cuba totalled 16 days and he was recommended for the Cross of the Order of Military Merit and in 1914 received the Cuba campaign medal for his time on the island.

On 11 September 1896 having recently been promoted to Lieutenant, Churchill and the Hussar’s were deployed to India on the troop ship Britannia and stationed in Bangalore.

During this time Churchill became displeased with his duty station and commented that Bangalore was “a third rate watering place” and the garrison life was “stupid, dull and uninteresting”.

It was then that Churchill joined the Malakand Field Force on the Northwest Frontier of India in September 1897and began to quench his thirst for action and heroism.

This point is illustrated by a quote taken from a letter written by Churchill to his family in September 1897 in which he says “I am bound for many reasons to risk something …. I mean to play this game out and if I lose, it is obvious that I could never have won any other …. I am more ambitious for a reputation for personal courage than anything else in the world. A young man should worship a young man’s ideals”.

During this period Churchill went on to fight in many battles and received several commendations and it is this time more than any other that shaped the man who led Britain to war in 1939.

Such was Churchill’s self-belief that he wrote of the intense fighting on the frontier that “Bullets are not worth considering …. I do not believe that the Gods would create so potent a being as myself for so prosaic an ending” Churchill then went on to fight in the Sudan and in Africa as a whole but resigned his army commission on 5 May 1899.

Churchill’s time as a war correspondent began in 1899 with the eruption of the Second Anglo-Boer War.

Although he had recently resigned his military post he travelled none the less to the scene of combat as a correspondent for the Morning Post arriving in Cape Town on 31 October 1899.

Within two weeks he was invited by Captain Alymer Haldane to accompany his troops on a reconnaissance mission during which time the armoured train the company was riding with was attacked and Churchill himself was taken captive by Boer rebels. Churchill was then taken to a Boer prison near Pretoria and spent his 25th birthday in enemy hands.

A month after his birthday Churchill escaped his captivity and successfully made his way to safety in Portuguese controlled Durban.

This was however not the end of Churchill’s time on the African continent as after achieving safety Churchill was not content to return home and recover, rather he obtained a new commission in the South African light horse an irregular unit under the command of Julienne Byng.

For a further 6 months Churchill served in the war participating in numerous battles and earning several commendations.

After returning from the war in Africa Churchill again stood for election to Parliament and was on this occasion successful in becoming MP for Oldham in 1900.

The “Khaki” election of 1900 called so due to the perceived British victory in the Boer War gave the Conservative Party a large electoral boost and allowed Churchill to fully capitalise on his experiences in the conflict and win, all be it closely in a seat in which he had come third the year before.

Despite this success it was not long before Churchill found himself at odds with the Party over the introduction and support of tariffs on foreign imports.

The move spearheaded by Joseph Chamberlain who had supported Churchill in Oldham was so at odds with the Victorian ideal of free trade that Churchill was removed as the official Conservative candidate for Oldham and defected to the Liberal Party.

In 1904 after dramatically crossing the house to take up a position on the Liberal benches, Churchill became a highly outspoken advocate of free trade and in 1906 was re-elected to Parliament as a Liberal this time in the constituency of North West Manchester.

This turned out to be a highly advantageous move as Churchill after securing victory in Manchester was promptly offered a junior ministerial position in the incoming Liberal government.

The next eight years passed quickly and successfully for Churchill as he aided the Liberal government in instituting the wide ranging social reform which would become the foundation for the modern welfare state.

During this period Churchill held several prominent cabinet positions including Home Secretary and First Lord of the Admiralty and this trend continued until the outbreak of the First World War.

Early in the war Churchill championed the battle in the Dardanelles/Gallipoli campaign both in Parliament and to the admiralty.

The eventual failure of these campaigns forced Churchill to resign his position in the House and travel to France to fight on the frontline.

After two years on the Front Churchill returned in 1917 as Minister for Munitions and eventually Secretary for War and Air and Colonial Secretary in the Liberal coalition under David Lloyd George, during this period Churchill secured the independence of Ireland and drew the borders of the Middle East.

In 1922 the Liberal Party suffered a catastrophic collapse and Churchill was left without post or party, despite this he was re-elected to parliament as an independent in 1924 and was later asked by Prime Minister Stanley Baldwin to re-join the Conservative Party and serve in government as the Chancellor of the Exchequer which he did until 1929.

After arguing against the party position on several prominent issues, including the granting of self-government to certain parts of India and arguing strongly for rearmament; in light of Hitler’s aggression contrary to the appeasement policy in effect by the British Government Churchill was denied office and relegated to the backbenches.

When in 1939 war broke out as Churchill had always maintained it would, the then Prime Minister Neville Chamberlain asked Churchill to return as First Lord of the Admiralty a position he held until becoming Prime Minister in 1940.

Churchill as Prime Minister is remembered always for rousing speeches and grim defiance in the wake of France’s collapse and German domination of Western Europe and it is this indomitable will that allowed Britain to survive and continue the fight.

As Prime Minister Churchill was aware that Britain was not strong enough alone to turn back the German forces and so he turned his considerable political skill towards the forging of a Grand Alliance with the United States of America and the Soviet Union, the entry of whom into the conflict in 1941 turned the tide of the war.

After the collapse of Nazi Germany and Hitler’s defeat Churchill alongside Stalin and Roosevelt redrew the map of Europe in the fallout of six years of total war.

This was however not the end of conflict for Churchill as he then turned his attention to the Soviet Union and what he called the Iron Curtain addressing the issue in a speech in Fulton Missouri in 1946 where he also coined the phrase and founded the Special Relationship between the UK and the US.

Churchill spent the next five years in opposition as the Labour Party under Clement Atlee won a landslide victory in the election of 1945.

During this period Churchill was a competent and effective leader of the opposition and when in 1951 the Conservatives again secured a majority Churchill once again became Prime Minister.

Churchill resigned as Prime Minister in 1955 but served as an MP until his retirement at the 1964 General Election.

Sir Winston Leonard Spencer-Churchill died on 24 January 1965 aged 90 and after 64 years as a Member of the House of Commons holding every major post in British government save that of Foreign Secretary.

Queen Elizabeth II declared that for his service he should be granted the great honour of a state funeral.

After lying in state for three days in the Palace of Westminster, a service was held at St. Paul’s Cathedral during which the Royal Artillery offered a 19 gun salute and the RAF staged a fly-by of 16 Lightning jets.

After this Churchill’s coffin was taken to Waterloo Station where he was transported to his final rest in Bladon near Woodstock.

Churchill’s Funeral was attended by dignitaries from across the world including Her Majesty the Queen and watched live by more than 350 million people across Europe. 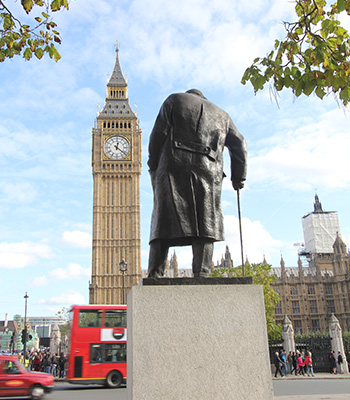