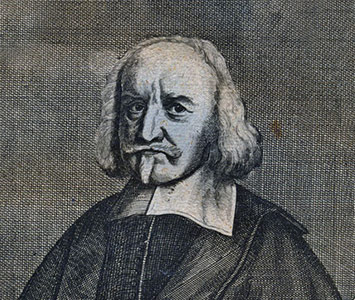 Hobbes saw people in ‘a state of nature’, before government, as inherently equal but with different interests and views that will inevitably lead to conflict.

This is not necessarily because they are following their self-interest, some may be altruistic and they may, in any case, not be clear what their interests are. In the state of nature all these views and interests are equally valid.

It only takes a few people or groups to argue over resources or status and society becomes chaotic.  In the end, people are imperfect and vulnerable and easily led into different ways of thinking.

The only way to prevent this was to have a strong central authority, not necessarily a Monarch, but with one person in charge the opportunity for conflict is less. Individuals still have free will as to whether to accept the central authority or not and, if they do so out of fear of punishment, that is also a free choice.

Respect for the law and the central authority should be taught through the institutions of society.

The central authority should control all civil, military, judicial and ecclesiastical matters and so Hobbes reject the idea of separation of powers.

He is often seen as rejecting religion but he only wanted religion kept out of politics, though he really means religious argument as he wants the ruler to decide the form of religious worship.

The overall social contract is that the ruler ensures good and peaceful government and the people obey.  If the ruler fails in this then the people can seek a different ruler.

In international affairs, at a time when wars across Europe were frequent, Hobbes sees the relationships between states as similar to the chaos of individuals in the state of nature.  States should seek peace but, if that fails, use war to maintain their interests.

Hobbes lived through the English Civil War between King and Parliament and was deeply influenced by the conflict.

As a tutor in the house of the Duke of Devonshire and then to the future Charles II he was in touch with events and, at different times, under personal threat from both sides.

Whereas later writers talked about the need for checks and balances between different parts of the State and the separation of Church and State, Hobbes found that conflicts of ideas between the executive and legislative branches and between Catholics, Anglicans and the various Protestant groups had only brought the country to ruin.

Hobbes was also living at a time when sources of authority based on religion and tradition were breaking down.

He rejected the scholastic teaching, based on fixed religious ideas, that he found at Oxford University and, instead was interested in the new types of scientific enquiry that were trying to get to the basis of how things worked.

Finally, the colonization of the Americas brought Europeans into contact with very different civilisations and, with little real understanding of the social structure of these societies, led thinkers to speculate on what people in a ‘state of nature’ were like, before the development of governments.

Hobbes laid the foundation of modern political philosophy and raises the central question that if everyone’s interests are equally valid then how are they reconciled?

In a more egalitarian age than that of Hobbes, this question becomes even more important.

Hobbes’s solution of an authoritarian power would not be accepted today, though he could not have seen the horrors of 20th-century totalitarianism, and, indeed, soon afterwards, John Locke came to a different conclusion about Hobbes’s central question.

Hobbes developed social contract theory, used by Locke and Rousseau as the foundation for their views of political authority.

His rejection of medieval views of divinely ordained hierarchies and his replacement of them by ideas of individual equality is the foundation of modern liberalism while belief in the equality of individuals under the law strengthened ideas of the rule of law as a key principle of the English Constitution.

Equally, the idea of Hobbes that individuals are imperfect and need to be regulated is a key part of conservative political thought, although conservatives see a range of institutions such as family, community or church doing this. Current Big Society ideas draw on this tradition.

Although, the separation of State and Church is not Hobbes’s preferred solution, his arguments about the need to keep religious and political arguments separate led others to this view.

Finally, the uncertainty of relationships between states and the need for them to pursue their interests, if necessary by war, is the foundation of what is now called the realist view of international relations.

The two main works of Hobbes are De Cive which sets out his overall moral and political philosophy and Leviathan which contains his theory of government.