What happened in the 2001 General Election

In 2001 Tony Blair sought permission from Queen Elizabeth II to call a General Election. This meant that 659 parliamentary seats in the House of Commons, were up for grabs as Members of Parliament and candidates fought for peoples votes.

The Candidates for Prime Minister

In principle the British public vote for the political party that they wish to see in Government and ruling the country. In practice how people feel about the leader of each political party is a major factor as they will become Prime Minister if enough of the candidates representing their party win.

The Labour Party campaigned on a strong economy and falling unemployment whilst the Conservative Party led a campaign, fought strongly on European politics.

The election was held on Thursday 7 June 2001. The political picture didn’t really change. It was recorded as the lowest voter turnout since 1918 at around 60% of those eligible to vote choosing to do so.

One of the MP’s elected in 2001 was the current Prime Minister David Cameron.

Prime Minister Tony Blair, elected in 1997 was returned as Prime Minister. Speaking of his victory he said “our mandate is to carry on the work we have started.”

Mr Blair went to Buckingham Palace on 8 June 2001 to ask the Queen if he could form a government. 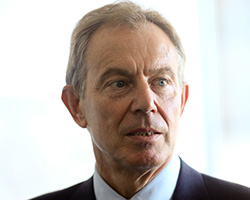