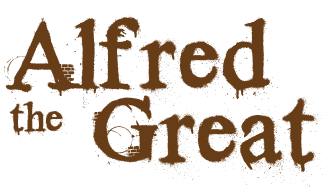 Who was Alfred the Great?

Alfred was born in 849AD in Wantage, Oxfordshire. He was the fourth or fifth son of Aethelwulf, King of the West Saxons and his first wife Osburh.

According to the Anglo-Saxon Chronicle, at about 4 years old Alfred was confirmed by the Pope in Rome.

He also went on a later pilgrimage to Rome with his father, returning in 856AD.

It had been agreed that following the death of their father Aethelwulf, Alfred and his brothers would each become King in turn.

This was to maintain a strong leadership and so not leave the kingdom weak in the hands of a child king.

The Viking threat had been growing more serious.

Danish ships raiding for plunder had escalated into the establishment of permanent Viking settlements. York was taken by the Danes in 867AD.

King Aethelred, Alfred’s elder brother, and Alfred himself commanded the forces of Wessex. In 871AD Alfred defeated the Vikings at the Battle of Ashdown.

This, however, was followed by defeats for Wessex. Alfred’s brother Aethelred died, making Alfred King of the West Saxons.

Continue your reading with these great titles (paid links)

In January 878AD the Danes, led by King Guthrum, captured the Royal stronghold of Chippenham. King Alfred and some of his loyal followers withdrew to the Somerset marshes.

From here King Alfred ran a campaign of guerrilla warfare against the Danes. Militia men or fyrds were summoned from Somerset, Hampshire and Wiltshire.

A fort was constructed in the marshes at Athelney.  In May 878AD King Alfred won the Battle of Edington.

Alfred’s army pursued the Danes back to their stronghold in Chippenham where they proceeded to starve them out.  After two weeks the Danes surrendered.

One of the terms of surrender was that Guthrum convert to Christianity. Guthrum was baptised at Aller, near Athelney, with King Alfred as his sponsor.

In 886AD a treaty was negotiated which established a frontier between those territories controlled by the Danes and those ruled by King Alfred.

The Danes held the land In the North and East of England – the Danelaw.  King Alfred ruled over Wessex, Kent and part of West Mercia.

After his victory at Edington, King Alfred began restructuring his kingdom’s fighting force and its military defences.

The Danes were still a threat.  Small scale raids on Anglo-Saxon settlements continued.  Large scale attacks were to begin again in the early 890’s.

King Alfred re-organised his army.  Instead of calling for men to take up arms when the Vikings attacked, King Alfred created a standing army.

These units were organised so that while one contingent was always ready at arms, the others continued to farm the land.

These guarded strategic points along rivers and roads and were spaced so that every part of Wessex was within a days ride.

The ‘Burghal Hidage’ detailed the size of the burh and the number of men to be garrisoned there.

Each landowner had an obligation to supply and feed these men based on the number of hides he owned.  The hide was not a fixed unit.

It was calculated from the productivity of the land and its value. The Wessex naval fleet was expanded with the construction of larger, faster ships.

King Alfred ruled his Kingdom with the aid of his ealdormen and thegns.

During the 880’s AD King Alfred recruited people to his Court who he believed would help him rebuild his Anglo-Saxon Kingdom.

Being a devout follower of Christianity, these included bishops and clerical scholars who came from Wales, Mercia and continental Europe.

All of Alfred’s courtiers were encouraged to read, in Old-English, Anglo-Saxon texts and poems. The most senior, elite Royal officials had to be literate as a requirement of their office.

He explains in his introduction to The Laws of King Alfred, that the law code or domboc consisted of his own new laws and regulations.

As well as those laws “…that our forefathers observed, those that pleased me…the ones that did not please me, I rejected with the advice of my councillors”.

Bishop Asser in his contemporary biography The Life of King Alfred, explained how Alfred insisted on judicial fairness, often reviewing judgements made by his Royal officials.

Another daughter Aelfthryth married the Count of Flanders. These marriages were used to strengthen alliances against the Danes.

The coinage was reformed. Coins were of greater purity and had a higher silver content.

Strict controls over the minting of coins restored trust in the Anglo-Saxon currency.

The Vikings destruction of the monasteries had seen standards in religious instruction and education fall.

King Alfred bemoaned the decline in the use of Latin and the inability to translate texts from Latin to English.

King Alfred tried to improve the literacy of his subjects.

He himself learnt Latin in his late thirties. Clerical scholars from Mercia and Northern Europe were brought in.

King Alfred chose a selection of books which he considered to be important and “necessary”.  They were mostly of philosophy, history and religion.

He had them translated from Latin into Anglo-Saxon.

Some of the works, such as Pope Gregory the Great’s ‘Pastoral Care’, were translated by King Alfred himself.

These books were then sent out to his bishops.

By the end of his reign, Anglo-Saxon coins and Royal charters were calling him the ‘King of the English’.

King Alfred began the process of reclaiming England from the Danes. He laid the foundations for an English State.

He was not called ‘The Great’ in his own lifetime.  He has come to be known as this because of the ideals he inspires.

He won a great victory against a far stronger enemy. He rebuilt the Kingdom of Wessex, promoted education, Christian teachings and the rule of law.

King Alfred died in 899AD and was buried in Winchester. His son, Edward succeeded him to the throne. 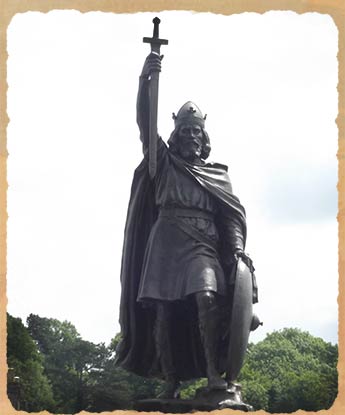