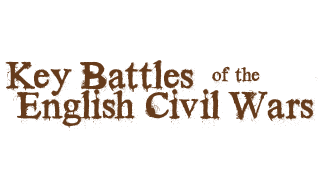 Also, try these great books to find out more about the battles of the English Civil Wars. (paid links)

The Battle of Edgehill was the first major battle of the English Civil Wars.

The Earl of Essex was in command of the Parliamentarian forces and had been ordered to leave Worcester and prevent King Charles from reaching London.

King Charles and his Royalist army were marching to London from Shrewsbury.

On the night of 22 October, the Royalists discovered that the Parliamentarians were only a few miles from where they were camped.

They decided to meet them in battle and the next day assembled their forces at Edgehill. The two armies did not face each other until the middle of the afternoon.

Both armies had drawn up in standard battle formation. Basically, this consisted of cavalry units and dragoons on the right and left flanks, infantry units in the middle.

The Parliamentarians, however, also had two cavalry regiments at the rear.

The battle began with the exchange of largely ineffective artillery fire.

Eventually, Prince Rupert of the Rhine, who was in command of the Royalist army, led his cavalry unit in a charge, shortly followed by the left-wing of Royalist cavalry.

Some of the Royalist cavalries returned to the field and began forming up. The battle eventually came to a standstill as night fell.

Both armies spent a cold night in the field, still in position. Although they formed up again the next day, neither side wanted a battle.

The Earl of Essex withdrew northwards, back to Warwick. King Charles was able to march south.

Although both sides claimed victory the Battle of Edgehill is generally considered to be a draw.

However, with the withdrawal of Essex, the road to London was clear. King Charles had the advantage.

Although the Royalists took Banbury and then Oxford the King’s army did not arrive in London until 13 November.

Here they were forced to retreat in the face of a numerically superior Parliamentarian force at Turnham Green.

The Royalists had failed to capitalise on their advantage and lost the chance to bring a swift end to the war.

The Battle of Marston Moor was the largest battle of the English Civil Wars.

In 1644 York was under siege from Parliamentarian and Scottish forces. King Charles commanded that Prince Rupert and his army relieve York.

However, the letter from Charles seemed to suggest to Prince Rupert that he should also “…beat the rebels’ army of both kingdoms which were before it…”

On 02 July 1644 Prince Rupert’s Royalist army and men from the York garrison assembled for battle on Marston Moor.

They opposed the numerically superior forces of the Scottish and Parliamentarian armies.

At around 7.30pm, just when the Royalists thought it had got too late in the day for battle, the Parliamentarian infantry advanced in the rain.

Many of the Scottish and Parliamentarian troops fled. Discipline was lost.

Then Oliver Cromwell led his cavalry unit behind the Royalist line and attacked. This changed the course of the battle.

The Royalist cavalry was defeated. Many of their infantry surrendered.

Casualties were high. The Whitecoats, the elite Royalist infantry made a last stand, but the survivors were eventually forced to surrender.

The North was now effectively under the control of the Parliamentarian and Scottish forces. Their decisive victory had almost wiped out the Royalist northern field army.

Prince Rupert of the Rhine had lost his reputation as an invincible opponent. Oliver Cromwell was seen as an effective commander.

His strong leadership and the discipline of his men had played a crucial role in winning the battle.

The Battle of Naseby was the decisive battle of the first English Civil War.

Sir Thomas Fairfax, commander of the Parliamentarian New Model Army had been ordered to break off his siege of Oxford.

The Royalist army of King Charles had taken the Parliamentarian garrison at Leicester. The New Model Army marched north from Oxford with orders to attack the Royalists.

King Charles marched south to aid Oxford, his winter headquarters. At Daventry, King Charles discovered that Fairfax and the New Model Army were closing on his army.

Instead of retreating, King Charles chose to stay and fight.

The Parliamentary forces had taken up position on a ridge, just outside Naseby.

Joshua Sprigge, chaplain to Sir Thomas Fairfax, described in his Anglia Rediviva [1647] how some of Fairfax’s men were arranged on the reverse of the ridge “…so the Enemy might not perceive in what form our battell was drawn…”.

The Royalists attacked first. The Parliamentarian infantry were forced back and some of their cavalry fled.

Prince Rupert and his cavalry units left the field and headed for the Parliamentarian baggage train at Naseby.

Oliver Cromwell, commander of the right flank of cavalry units successfully repelled a Royalist cavalry charge and then sent units to attack behind their lines.

Parliamentarian forces re-grouped and lined up for another advance. The Royalist infantry was defeated.

Some surrendered others fled. Prince Rupert returned to the battlefield but his men refused to fight.

The New Model Army had won a decisive victory. On the 18th June, Fairfax retook Leicester.

Naseby was the beginning of the end of the first English Civil War. King Charles had lost his main Royal army.

As well as the loss of his infantry, many horses, field arms, artillery pieces and gunpowder barrels were also captured. Resources the King could not easily replace.

The royal baggage train had also been taken. This included the personal correspondence of King Charles.

The publication of these as The King’s Cabinet Opened, gained support for Parliament as they showed Charles was seeking Catholic support.

The success of the New Model Army demonstrated the benefits of having a national standing army, rather than one with regional allegiances.

King Charles II, after the restoration, created a standing army which was the forerunner of the modern British army.