Mary became Queen in 1553 but not all were happy with the return of England to the catholic religion. Many died as Mary forced through her changes. She faced rebellions, including the Wyatt Rebellion and secured her throne by executing Lady Jane Grey who was of the now old Protestant religion.

Once Mary became Queen she stopped the Protestant Reformation and began to convert England back to a Roman Catholic nation.

The First Statute of Repeal was passed by Parliament in 1553. The Church in England was to be restored to the same position it had in the last year of Henry VIII’s reign. All the religious legislation passed during the reign of Edward VI was repealed. The Church in England was now governed by the doctrine set out in the Act of the Six Articles 1539. Priests were forbidden to marry. Any priests who were already married had to leave their families if they wanted to continue in their roles. The Latin Mass was restored.

Cardinal Reginald Pole had returned to England in November 1554. Pole, a devout Roman Catholic, had been outspoken against Henry VIII and his marriage to Anne Boleyn. As Pole had fled to the continent, Henry VIII had persecuted his family instead. This included the imprisonment and then brutal execution at the age of 70 of Mary’s friend and supporter, Lady Margaret Pole, Countess of Salisbury. Reginald Pole became one of Mary’s chief advisors and was tasked with helping to re-instate Roman Catholicism in England. Mary appointed him Archbishop of Canterbury.

Cardinal Pole believed that the education of priests was necessary to fully restore Catholicism to England. He instructed the Catholic Bishops to regularly supervise their parish priests. Pole wanted to build more seminaries and provide better training for the clergy. A lack of church finances hindered Pole’s efforts.

During Mary’s third Parliament, November 1554 to January 1555, the Second Statute of Repeal was passed. This abolished all Protestant religious legislation from 1529. The Pope in Rome was re-instated as Head of the Church. However, there was now a precedent for the Monarch and Parliament to have a greater control over the Church in England. While the Pope was restored as Head of the Church, Mary did not allow the Pope to dictate how the Church of England would be run. Pope Paul IV removed Cardinal Pole as Papal Legate to England and ordered his return to Rome to face charges of heresy. Mary refused the Pope’s demands

England’s aristocracy were unwilling to return the land they had acquired after the Dissolution of the Monasteries. Mary did not wish to lose the support of the nobility and gentry which made up her government, as this might jeopardise the implementation of her religious reforms. Only those monastic lands held by the Crown were restored to the Church.

Dealing with people who didn’t want to change (Heresy)

Parliament had also re-instated the heresy laws. The penalty for being found guilty of heresy was to be burnt at the stake. Mary believed that it was her duty as a Catholic Queen to punish heretics and to safeguard the spiritual wellbeing of her subjects. The first executions began in February 1555. Most of those executed were from London and the South-East. There were a few high profile victims including the former Archbishop of Canterbury Thomas Cranmer. Of the approximately 280 individuals burnt at the stake, most were ordinary people. The burnings did not stop committed Protestants from practising their faith. Instead, many of those executed were regarded as martyrs or heroes to the Protestant cause.

Several hundred wealthy Protestants chose to go into exile on the continent rather than face persecution in England. Europe was a source of Protestant propaganda. Pamphlets were distributed promoting the Protestant faith and denouncing Mary’s religious policies and the Catholic Church.

Mary’s persecution of the Protestants would be dramatically recorded in John Foxe’s Actes and Monuments or Book of Martyrs. The book was widely read and helped influence popular opinion against Catholicism. It also contributed to Mary’s image as ‘Bloody Mary’, although she wasn’t called this until long after her death.

In February 1554 around 3000 men led by Sir Thomas Wyatt, marched on London. Their intention was to remove Mary from the throne and replace her with her sister Elizabeth who would marry Edward Courtenay. Mary refused to leave London. Instead Mary gave a rousing speech at the Guildhall in which she pledged her dedication to the realm saying that she would not enter into a marriage that did not benefit England. Mary declared that her coronation ring, signifying her marriage to the kingdom, never left her finger. She urged her subjects to stand with her against the rebels.

Wyatt’s Rebellion failed. Around ninety of the rebels, including Thomas Wyatt were executed. Elizabeth and Edward Courtenay were imprisoned in the Tower. Mary also realised that Lady Jane Grey would continue to be a threat to her throne and had her killed.

Our Queen Mary I pages… 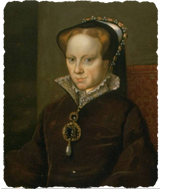